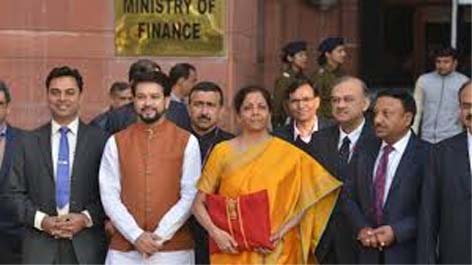 Prithpal Singh, Dheeraj Jandial
The Budget 2020-21 will be remembered in the annals of the economic history, as a defining moment for Jammu and Kashmir as this was the first ever Annual Financial Statement which is presented and deliberated upon in the Parliament and not in the Legislative Assembly. The abrogation of the special status in the August last year could not diminish the ‘special’ category Jammu and Kashmir beholds as there was quantum leap in the financial allocation made to the erstwhile State for the ensuing fiscal year.
Union Finance Minister Nirmala Sitharaman, while presenting the annual Budget for Jammu and Kashmir in Lok Sabha on March 17 enhanced the allocations for the ensuing financial year by Rs 2517 crore in comparison to what was allocated during the year 2019-20. The Governor administration has approved Rs 88,911 crore Budget for the erstwhile State (including Ladakh) after it was placed under the Governor’s Rule last year.
The marked enhancement by Rs 2517 crore, exclusively for Jammu and Kashmir implies an assurance that the concerns of the erstwhile state for development are not only lent an ear but guarantee readiness of the Union government for liberal endowments. The enhanced allocation pegging the annual Budget for Jammu and Kashmir in six figuration zone of Rs 1,01,428 crore signifies that all sectors of the economy has received whatever they demanded and desired.
DEVELOPMENT PUSH
With Jammu and Kashmir expected to cross the bar of Rs 1 lakh crore mark in allocations/receipts, the Budget 2020-21 is going to be harbinger for development. This could be gauged from the substantial jump in the capital component whereunder Rs 38,764 crore were earmarked for development indicating an increase of 27 percent. The Budget 2019-20 has earmarked Rs 30,469 crore for capital expenditure while in the Budget 2018-19 the allocation under this sector was Rs 29,128 crore. It is evident that the capital sector registering an insignificant increase of just 4 per cent in 2019-20.
While, the 27 percent hike in the capital sector allocation during the ensuing financial year is imbued with the aspiration of GSDP growth of 11 percent, any slowdown in the utilization of the grants needs to be negated through perspective planning focussing on generation of capital receipts. The completion of 6378 projects during the financial year 2019-20 is a booster dosage for realization of healthy growth rate of 11 per cent GSDP for the newly created Union Territory.
THE CHALLENGE OF REVENUE
With focus on making Jammu and Kashmir as the fastest growing Union Territory, the Union Finance Minister made it clear during her presentation that improving Governance and enforcing financial discipline through mandatory compliances with pre-requisites shall help in steering Jammu and Kashmir towards the path of rapid development. Major initiatives for financial inclusion were carried out post August 05, 2019 in the form of scrapping/repealing of the archaic laws and bringing Jammu and Kashmir under the purview of the system followed throughout the country. The introduction of the e-procurement mechanism and transaction of business through digital means was a challenge that was deftly dealt with, despite low internet connectivity.
The Budget 2020-21 has targeted the realization of revenue receipts to Rs 91,100 crore whereas the receipt generation during the year 2019-20 was fixed at Rs 66,180 crore and in Budget 2018-19 the revenue receipts were targeted for Rs 64,269 crore.
The hike of 37.50 percent in revenue realization targeted so fixed for the newly created Union Territory whereunder the revenue receipts have to register an increase of Rs 24,820 crore over the previous fiscal is a challenge. The massive revenue realization being targeted shall invariably result in compliance of laws and rules. This is also an indicator that no waivers or amnesty would be there, and these benedictions would be replaced by strict enforceability. Enlarging the purview of revenue receipts under the annual Budget 2020-21 also points towards widening of the tax base in Jammu and Kashmir for engulfing more and more people under the tax ambit. The revenue realization as such remains a trick field for the dispensation and as such necessitates clever navigation of the ball.
IMPRECISE DETERMINANT
The Budget document 2020-21 for Jammu and Kashmir has earmarked Rs 893 crore for building infrastructure and improving connectivity in Jammu and Kashmir. While, Rs 400 crore is being earmarked to improve the quality of roads benefitting 17 lakh people, another Rs 310 crore is being set aside for road sector. The dampener under this sector is the allocation of Rs 8 crore that are being provided for the newly created Mass Rapid Transit Corporations for Jammu and Srinagar to improve urban transport system. The feeble allocation for Mass Rapid Transit System is imprecise on whether the facility would be in place in the year 2024 for the capital cities of Jammu and Srinagar. The allocation does not any way commensurate with the project cost of Rs 9590 crore worked out for rolling this facility in the envisaged Smart Cities of Jammu and Srinagar.
Further, the Budget document does not spell out the provisioning for laying of Mass Rapid Transit System connectivity in a time bound manner. Any delay in release of funds for this prestigious project shall invariably result in delayed completion and cost overruns. Jammu and Kashmir cannot afford to miss the deadline set for this facility, as the longing for connecting Kashmir through Rail is yet to be accomplished in toto.
While, the flow of funds is expected to be smoother for Jammu and Kashmir, the real test remains on the lapse of the grants or surrenders by the executing agencies. Revalidation surely cannot be a refuge!
feedbackexcelsior@gmail.com