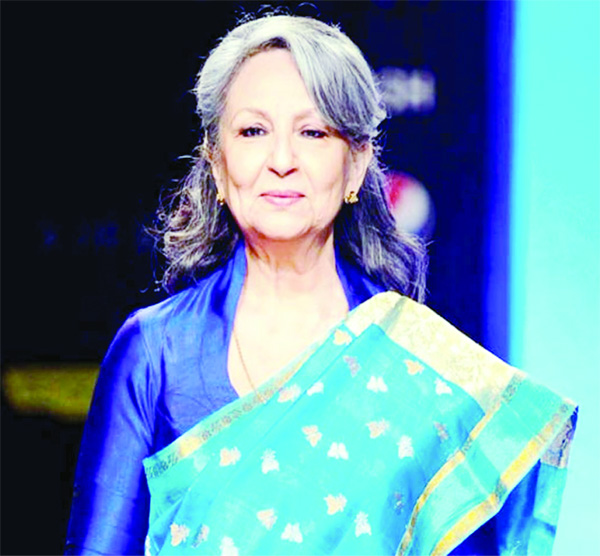 Sharmila Tagore, the graceful icon of the Indian cinema turned 76 on December 8.My parents rarely went to the films and never with children, so I do not have any recollection of any films seen in my school days. It was only in college that I began to watch films, and that’s when I first saw Sharmila Tagore in a variety of roles. Her most iconic film easily is Satyajit Ray’s Devi, with an unforgettable opening shot, with hundreds gathering at a local zamindaari household’s outer portico to see the deity. ‘Ebaar tore chinechi Maa’, a Shyma Sangeet, ‘Now I know you Mother’ is a genre of music rarely used these days in visual depictions but it builds up expectation-to see a stone goddess and that first shot never fails to come as a bit of a shock, a doe-eyed young woman whose eyelids never flicker
There have been at least a dozen films with that title, after that in various Indian languages, -yet if it does nothing else, it perhaps brings deification sharply into public attention, a social trait of the average Indian, something sharply focussed on in the 1960s film; nevertheless, deification of people has not decreased in the last 60 years and comparing prime ministers to parampurush or Durga has not helped. In these pandemic times, no amount of appropriation, clanging of bells, lighting of lamps can actually bring relief and Devi refreshes our memory: Sharmila’s character Dayamoyee could not bring a dead child alive despite prayers and tears.
Devi is Sharmila’s second film with Soumitra Chatterjee, a sixty year association. Last month, Sharimla’s tribute to this fine actor was, ‘the basis of our friendship was his persona, his values, just the inimitable way he was. There was so much to learn from him, he leaves behind a rich legacy.’ Aranyer Din Ratri was another memorable duet with Soumitra.
Talking about legacy, Sharmila has always credited her father, Gitindranath Tagore, a corporate official stationed in Hyderabad where she was born in 1944, for her career in films. Today celebworth.net puts Sharmila’s net worth as $50 million, but Sharmila Tagore has never been about the money but always about the grace. Her parents were always acutely aware of the value of art, her maternal grandfather was the noted Assamese social worker Gunabhiram Barua. Sharmila’s sister Oindrila played Mini in Tapan Sinha’s Kabuliwala, another 1959 film. So, it comes as no surprise that the 16- year-old Sharmila was Ray’s first choice for Aparna of Apur Sansar in 1959. While Oindrila went on to become a Bridge star, Sharmila it was who has made her mark, both in Tollywood and Bollywood.
She broke into Bollywood five years after her Bengali debut, with Shakti Samanta’s Kashmir ki Kali in 1964. But it is Aradhana with Rajesh Khanna, an adoption of the 1946 English film, To Each His Own It won not only the 17th Filmfare Awards as Best Picture but Sharmila was the Best Actress of the year too. Here too, in the opening shots, Samanta focuses on her eyes, Sharmila watching from the train carriage, the antics of a young man. Another Rajesh Sharmila pairing has been Daag. It is a 1973 romance by Yash Chopra in his debut as a producer, which is supposed to have laid the foundation of Yash Raj Films. It is an adaptation of the 1886 Thomas Hardy novel, The Mayor of Casterbridge, later made into film in the UK several times over.
However, Mississippi Masala, the 1991 romantic film directed by Mira Nair, is one of Sharmila’s most significant films. It stars Denzel Washington, Roshan Seth and several other stellar actors. Set in rural Mississippi, USA, the film explores interracial romance between African Americans and Indian Americans in the United States. The film seems prophetic with in-coming President Joe Biden including American Indians like Kamala Harris, Neera Tanden, Vivek Murthy, Atul Gawande, Celine Gounder and many others in his government. It is obvious; American Indians are coming under the sunshine, albeit 30 years after Mississippi Masala.
A 60-year career in films is phenomenal, especially for a female artiste in India. Sharmila’s daughter Soha, in her autobiographical book, The Perils of Being Moderately Famous calls her mother a ‘working mother’. It was Sharmila, the bread winner that comes across strongly, although Sharmila was married to former Indian Captain and the Nawab of Pataudi, Mansur Ali Khan in 1969.
She was a real feminist in the Indian filmdom who played her role with ease. She weathered the storm over her marriage with a reputed muslim like Mansur Ali Khan Pataudi with self confidence keeping full faith in her secular ethos which she imbibed from her parents. Her grace, magnetic personality and smile have remained an asset to the Indian cinemagoers for the Last six decades.
Sharmila Tagore has also served as the chairperson of the Central Board of Film Certification from October 2004 to March 2011. In December 2005, she was chosen as a UNICEF Goodwill Ambassador. She was awarded the Padma Bhushan in 2013 for her contribution to India’s art and culture. Sharmila Tagore’s filmographic history is also that of the transition of Indian films through the decades, how themes changed, how presentations changed, how focus changed; any film buff’s journey into the world of Indian films can be a good beginning, seeing the film world through Sharmila’s doe eyes – seeing some of her classics.
Bollywood has shown us how to age gracefully. After Amitabh Bacchhan, Rekha , Waheeda Rahman and Sharmila Tagore are perhaps among the most graceful senior citizens we have today to cherish, Sharmila especially her first five years, then the 1970s and the later ones-through her tears and comedies. (IPA)