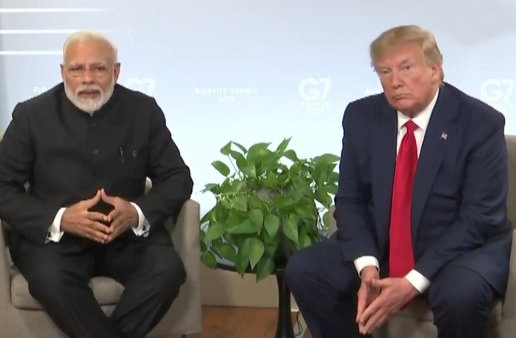 BIARRITZ/LONDON: Prime Minister Narendra Modi on Monday categorically rejected any scope for a third party mediation between India and Pakistan on Kashmir, saying the two countries can discuss and resolve all issues bilaterally and “we don’t want to trouble any third country.”

Modi made these remarks while interacting with the media alongside US President Donald Trump, who ahead of his meeting with the prime minister had said that he will discuss the Kashmir issue with him on the sidelines of the G7 summit in the French town of Biarritz.

Trump in recent past has offered mediation between India and Pakistan on Kashmir.

“There are many bilateral issues between India and Pakistan, and we don’t want to trouble any third country. We can discuss and resolve these issues bilaterally,” Modi said. (agencies)