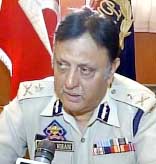 SRINAGAR: All the Over Ground Workers (OGWs) involved in an attack on Amarnath yatris on the Srinagar-Jammu national highway in Anantnag that left eight pilgrims dead and more than 20 others injured last month have been arrested, a senior police officer said.

“We have arrested all the OGWs who provided support to militants in carrying out the attack on a Gujarat bus on July 10 night,” Inspector General of Police Munir Ahmad Khan told reporters here this afternoon.

In reply to a question, Mr Khan said the OGWs are singing during the questioning. “We have identified the militants responsible for the attack,” the IGP said adding, “We are confident to get them soon.”      (AGENCIES)