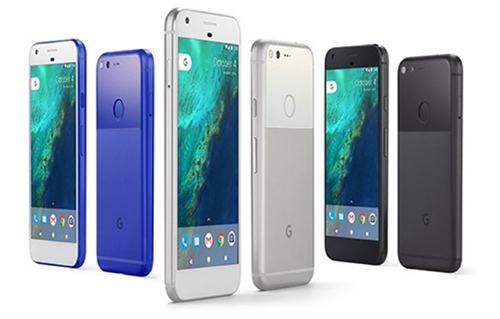 Yantragyan
Google Inc (Subsidiary of Alphabet) has launched all new premium smartphones Google Pixel and Pixel XL. The new smartphones are launched along with new Daydream VR platform: Daydream View. Lets take further look at what new Google Phones have to offer.
General Specification of Google Pixel
#AMOLED 5-inch 1080p display on the Pixel, 5.5-inch Quad HD Display on the XL
#Qualcomm® Snapdragon 821 Quad Core Processor with 4GB LPDDR4 RAM
#12.3 MP with large 1.55pm pixels and f/2.0 aperture, Front cam is 8MP
#Pixel Imprint fingerprint sensor
#2,770 or 3,450 mAh Battery
#32GB or 128GBinternal storage with no expandable memory
#USB Type-C® Bluetooth 4.2
Design and Screen
New Google Pixel phones look premium from first appearance itself. The smartphones have Aluminum uni-body and polished glass combination. This combination looks quite refreshing and premium at the same time. There is new Google logo at the back of phone. The phone is actually made by HTC. But there is no HTC branding on the phone unlike Nexus phones. Now, this means Google is going full premium. Google wants to be like Apple. The phone has headphone jack (Hurray!)at the top and USB type- C port at the bottom for charging and a fingerprint scanner on the back. The Google pixel will be available in different color options like black, blue, and silver. The blue color is US exclusive.
The Google Pixel has 5 inch screen while the Google XL has 5.5 inch screen . Both the screen are Amoled Screens. The smaller 5-inch version has Full HD resolution while Bigger Pixel XL has Quad HD resolution. The screen of the new smartphones will have excellent contrast and very deep black levels. This is due to screen being Amoled. However to check whether the new smartphone screen is as good as Samsung mobile screens, we might have to wait a little more.
Camera
Now coming to one of the most important feature of the smartphone these days. It’s the camera. The Google Pixel phones are powered by 12.3 MP back camera and 8MP front camera. Google has straightaway went ahead to title the smarphone cameras as best ever. They showed the DXO Mark rating of the new Google pixel phone which s 89. While the new iPhone 7 has rating of 86 only. While the DXO Mark rating is not the absolute benchmark, but this does tell how much importance Google has paid to camera of the phone.
Back camera of the phone has f/2,0 aperture size with large 1.55pm pixel size. Same trend is followed by other big smatphone companies like Samsung, Apple, HTC etc. here’s also very intricate, gyroscope-based video stabilization on board, however there’s no optical image stabilization for stills.The new Google Pixel camera may be among the best smartphone camera ever.
Hardware and UI
Both Pixels have a quad-core Qualcomm Snapdragon 821. This is the latest chipset from Snapdragon. The phones have clock speed of 2.15GHz. Both the phones will have 4GB of DDR4 RAM. Nothing much of innovation in hardware space. The new Snapdragon 821 is already the best powerful chip-set available in the market right now. Though RAM could have been increased to 6 GB considering the price of the phone. For more tech news Like Yantragyan on Facebook. Google has paid most attention to the software of the phone. Google Pixel smartphone run a specialized version of Google’s Android software, Nougat 7.1, which includes support for the Daydream virtual reality platform that was announced this summer at Google I/O.
These phones come equipped with all new Google Assistant (also available in Google Allo messaging app) available wherever you are in the phone. This makes the Pixels phones the first phones with Google Assistant, which you can access by touching and holding the home button or saying the “OK, Google” command.
One more interesting feature is Endless cloud storage. Now Google will allow free unlimited storage for full-resolution images and videos shot with the Pixel. That means all your images and videos will be automatically uploaded to Google cloud at full resolution. This similar feature like Google Photos but without size limit restrictions.
Battery and Storage
Google pixel packs 2770mah battery while Pixel XL has bigger 3450mAh battery. The battery backup of the new smartphone seems to be quite at par what current phones offer. With special focus on quick charge. Google stated that with 15 min of charging, we can have backup of 7 Hours. Now coming to storage part , the new mobile phones will come in two storage options 32 GB and 128 GB. There is no memory card slot for expanding the memory. This is same as previous nexus phones.
Pricing and Availability
Google Pixel smartphones are available for pre-order from today only in U.S., Australia, Canada, Germany and the U.K. Availability for India is not announced yet. Google has already started taking Pre-orders in India on online platforms. The Google Pixel ( 5-inch) is priced at around Rs 44,000 for 32GB of storage. This price scales up to Rs 50,000 with 128GB storage version. The Google Pixel XL is priced at around Rs 51,000 for 32GB, and around Rs 58,000 for 128GB storage. Google gives a choice between black or silver for color, with an exclusive “really blue” option with Verizon in the US. For more tech news Like Yantragyan on Facebook.