E-Paper
Home Todays story All infiltrators will be identified, thrown out before 2024: Shah 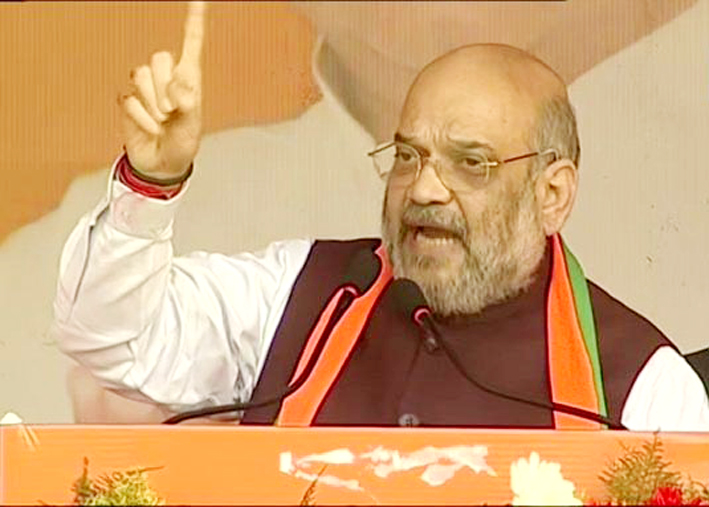 ‘People want Kashmir to be integral part, terror to end’

Sanjeev Pargal
JAMMU, Dec 2: In a significant announcement, Union Home Minister Amit Shah today set 2024 deadline for identification and ouster of all infiltrators from the country, a demand which is being raised repeatedly by many political parties and social organizations including the Bharatiya Janata Party’s, J&K unit as a large number of Rohingyas and Bangladeshis have illegally settled in Jammu, Samba and some other parts of the Union Territory.
“The Government will identify and throw out all infiltrators from the country before 2024 (i.e. within the next four years),” Shah declared while addressing two rallies in election bound Jharkhand today.
Shah’s statement assumed significance as large number of Rohingyas and Bangladeshi nationals have also been settled illegally on the outskirts of Jammu and Samba districts in Jammu region during previous political regimes of National Conference-Congress and People’s Democratic Party-Bharatiya Janata Party.
There has been increased demand from many political parties including the BJP, National Panthers Party etc and many social organizations that the Rohingyas should be ousted from Jammu as they were settled here by Kashmir-centric parties for changing demography of Jammu region.
Defence Minister Rajnath Singh during his tenure as the Home Minister in Narendra Modi 1.0 Government had ordered audit of Rohingyas and Bangladeshis who had illegally settled in Jammu.
“Rahul Baba Kehte Hain Ki NRC Kyun La Rahe Ho? Ghuspethiyon Ko Kyun Nikal Rahe Ho? Kahan Jaaenge, Kya Khayenge? Kyun Bhai Aapke Chachere Bhai Lagte Hain Kya? 2024 Ke Pehlay Desh Se Ek-Ek Ghuspethiyon Ko Chun-Chun Kar Nikalne Ka Kaam BJP Sarkar Karne Wali Hai (Rahul (Gandhi) says why are you bringing NRC? Why are you ousting infiltrators? Where they will go, what they will eat? Whether they are your cousins? The BJP Government is going to execute the task of removing every single infiltrator from the country before 2024),” the Home Minister said.
Shah said he was sure that the people want Kashmir to be an integral part of India, they want terrorism to end, they want Naxalism to go and they would like Ramlalla’s temple to be built in Ayodhya.
“I can go on and on,” he told the meeting before shifting to the NDA Government’s move to scrap Article 370 that he said, ensured that Kashmir will remain with India for good and the recent verdict of the Supreme Court in the Ayodhya title dispute.
Shah’s emphasis on rolling out the National Citizens’ Register for the entire country comes amid a continuing back-and-forth between his party and Bengal Chief Minister Mamata Banerjee over implementing the citizens’ list.
The BJP president alleged the Congress made attempts to thwart the hearing of the case in the Supreme Court.
“Congress leaders would tell the Supreme Court that there is no need for hearing the Ram Janmabhoomi case. With your (people’s) backing, we submitted that it be taken forward, and the result is that the Apex Court has ruled that only a Ram temple will be built in Ayodhya,” he said.
PTI adds: Shah also attacked the JMM-Congress-RJD alliance, which is crossing swords with the BJP for electoral laurel in Jharkhand.
The BJP president gave credit to the State’s BJP Government for “uprooting” the Naxalite menace and for bringing in development.
“When Congress was in power, it fired upon students agitating for Jharkhand State and attacked them with batons.
Now Hemant Soren (JMM leader) is sitting in the laps of the same Congress so he can become the Chief Minister,” he said.
Referring to the “Vikas Ki Ganga” flowing in Jharkhand because of the “double engine” growth the Centre and the State Governments had ushered in together, Shah said the Modi Government built AIIMS in Deoghar, and it will now construct an airport there and also in Bokaro, Dumka and Jamshedpur.
About 20 lakh farmers have benefited from the crop insurance scheme, he said.
Within five years, the Narendra Modi Government and Raghubar Das dispensation uprooted Naxalism and paved the way for the State’s development, he said.