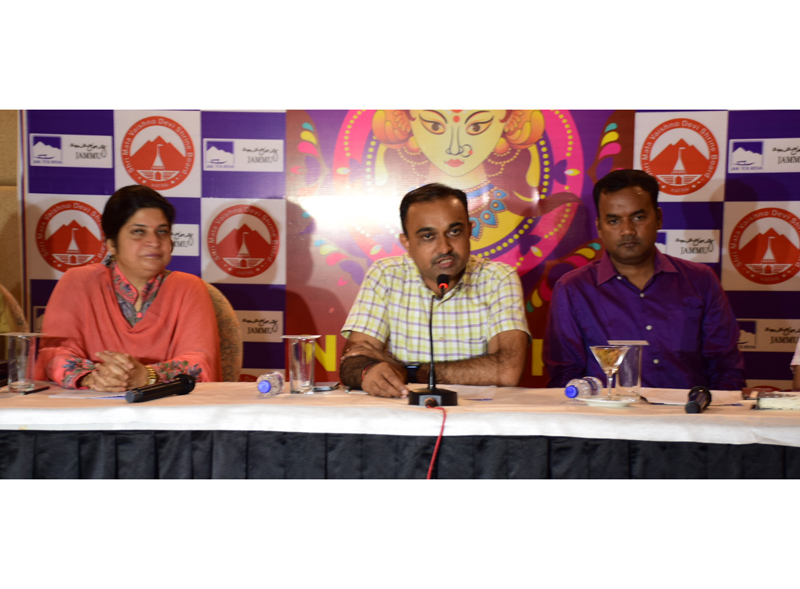 JAMMU, Sept 25: Tourism Department Jammu, in collaboration with Shri Mata Vaishno Devi Shrine Board, Divisional Administration Jammu and District Administration Reasi have fully geared up to organise annual Navratra Festival 2022 at Katra from September 26 to October 4.
Addressing the media persons here today, Divisional Commissioner Jammu, Ramesh Kumar said that all arrangements are in place to celebrate Navratra Festival 2022 at the Holy Katra town and other parts of the division.
He said that in the last two years the festival was celebrated with limited events on a small scale due to the Covid pandemic. He said that this year the Navrata Festival will be celebrated with more enthusiasm and religious gaiety as many new activities have been included in the nine day long Navratra festival.
This year the Navratra Festival Committee 2022 has decided to celebrate the mega event both at Katra and Jammu from 26th September to 04th October, 2022. The mega event is being organized by Department of Tourism, J&K in collaboration with Shri Mata Vaishno Devi Shrine Board, Divisional Administration, Jammu, Central Bureau of communication, UT of J&K and Ladakh and Active participation of local tourism trade industry, NGOs and stakeholders of Katra and Jammu etc under the overall supervision and guidance of Divisional Commissioner, Jammu (Chairman Navratra Festival Organizing Committee).
While giving details of the events to be organized during holy Navratra days, the Div Com informed that the inaugural function will be held at Yog Ashram Ground Katra on September 26 followed by a series of events including the laser show on Mata Ki Kahani.
“All India devotional song competition for budding singers from all over India shall start daily at 9 PM at Yog Ashram Katra, while play ‘Mata ki Kahani’ will be performed daily at Kailash Parking, Railway Road Katra at 7 PM”, the Div Com informed.
He further said that the main attraction of this year is the laser show on the Mata Ki Kahani and the same will be held daily. “On the inaugural day, it shall be showcased at Yog Ashram Ground Katra. From the second Navratra onwards, the Laser Show shall be held at Kailash Parking, Pujari Chowk, Railway Road Katra at 8:00 pm onwards, ” he added.
Similarly, morning Prabhat Pheri processions amid singing of bhajans of Maa Vaishno would be held at Katra from 27th September 2022. Artists from different states of India shall participate in the devotional processions which would start at 5:30 am from Fountain Chowk Katra towards the main Bazaar Katra.
The folk dances of different states of India and depicting the cultural diversity of J&K will form another attraction of the festival. Artists from across the UT and different parts of India are going to take part in the daily cultural processions which would start from Asia Chowk Katra and move towards the main Bazaar culminating at the Yog Ashram Katra. Shobha Yatra shall start from 27th September and continue till 4th October.
Garba and Dandiya Night shall be held on 2nd October at Padma Shri Padma Sachdev Govt PG College for Women, Gandhi Nagar, while Mata Ki Bhaint will be performed at Ashtdashbhuja Mata Mandir Sarthal Kishtwar on September 27, 2022, at Raghunath Bazaar , Jammu on September 28 and at Jagti Jammu on October 1, 2022.
Ek Shaam Maiya Ji K Naam’ shall be held at Jasmergarh Fort on 29.09.2022, Hiranagar Kathua. The temple premises shall be decorated for the said events.
Daily Ramleela shall be held at Higher Secondary School Katra from 6 pm to 8 pm from 27th September 2022 till 4th October 2022.
Cultural programmes shall be held daily at Higher Secondary School Katra from 8:30 pm onwards where the cultural diversity of different regions of India shall be displayed by the distinguished performers from all over India. Special emphasis shall be laid on Dogra culture. Multimedia Exhibition shall also be installed and put on display for the visiting tourists from 27th September at the same venue.
Bhagwat Katha recital shall be held at Raghunath Temple Katra premises from 28th September 2022.
A special programme by the specially abled children from across India would be held at the Auditorium of Spiritual Growth Centre, SMVDSB Katra on 1st October, 2022.
Indian style wrestling competition (male and female wrestling competition) shall be held at SMVDSB Stadium Katra on 2nd October 2022.
Hasya Vyang and Kavi Sammelan shall be held at Higher Secondary School Katra on 5th October 2022.
The hotel and restaurant Association of Katra has offered a 30% discount to tourists on Hotel Tariffs during the festival period, while JKTDC has announced a discount of 50% on its room tariff at Katra. In addition to the above, Five events are being organized in Jammu Division also for the tourists and the people of Jammu and Kashmir to create an atmosphere of festivity.
Director Tourism Jammu, Vivekanand Rai; Joint Director, Central Bureau of Communication, Gulam Abbas, Deputy Commissioner Reasi, Babila Rakwal; Joint Director Tourism, Sunaina Sharma were also present during the press conference.
Meanwhile, Div Com conducted an extensive tour of Jammu city and inspected the sanitation services and condition of roads in different parts of the winter capital.
The Div Com was accompanied by Deputy Commissioner Jammu, Avny Lavasa; Commissioner JMC, Rahul Yadav; SSP Traffic Kaushal Sharma; Superintendent Engineer PWD and other concerned officers.
The Div Com started his tour from Bahu Fort and visited Kachhi Chawni, Raghunath Bazar, Satwari- Airport Road, Ambphalla, Canal Road and other adjoining areas.