NEW DELHI, June 11: Alembic Pharmaceuticals has received the US health regulator’s nod for Bupropion Hydrochloride tablets, used for treatment of major depressive disorder.
“The company has received approval from the United States Food and Drug Administration (USFDA) for its abbreviated new drug application (ANDA) for Bupropion Hydrochloride tablets,” Alembic Pharmaceuticals said in a BSE filing.
The approval is for strengths of 75 mg and 100 mg.
The approved product is therapeutically equivalent to the reference listed drug product (RLD) Wellbutrin tablets of GlaxoSmithKline LLC.
Quoting IMS December 2017 data, the company said Bupropion Hydrochloride tablets had an estimated market size of USD 37 million.
The company now has a total of 72 ANDA approvals from the USFDA.
The stock was trading at Rs 467.40 apiece, up 7.49 per cent, on the BSE. (PTI) 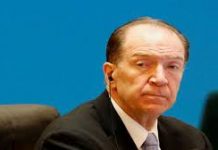