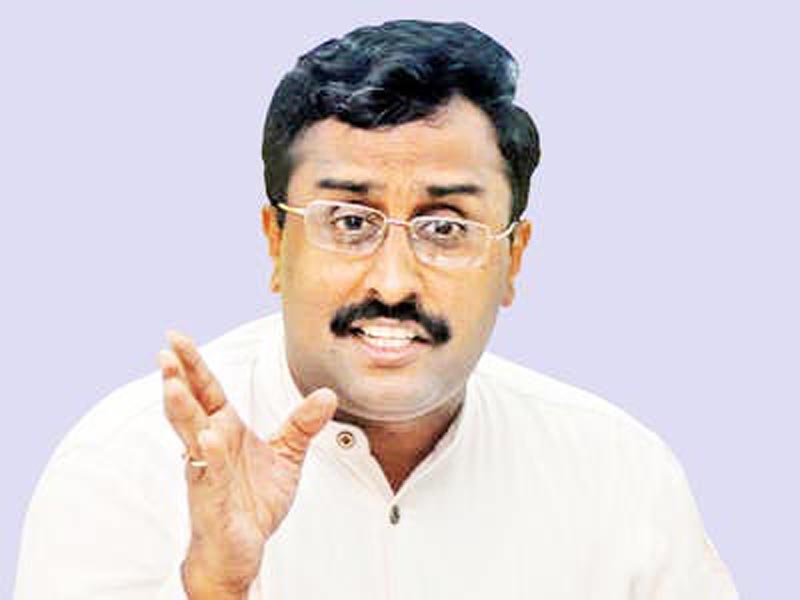 JAMMU, July 6: Maintai-ning that Aksi Chin is the part of India which has been forcibly annexed by China in 1962 war due to the blunders of then Congress Government at Centre headed by Pt Jawaharlal Nehru, BJP national general secretary and incharge UTs of Jammu Kashmir and Ladakh, Ram Madhav today said that with the formation of UT of Ladakh Aksi Chin has been included as one of its districts.
Click here to watch video
Madhav, who is on three days visit of Leh was addressing the special functions organized in the district in connection with celebration of 119th birth anniversary of founder president of Jana Sangh , Dr Shyama Prasad Mukherjee and 85th birth anniversary of Tibetan spiritual leader Dalai Lama here on the second day of his visit today. He made a frontal attack on Congress and Nehru for gifting the Indian territory to both China and Pakistan during its rule.
He said BJP is committed to retrieve its land under forcible occupation of China and Pakistan and present Government led by Narendra Modi will not do any compromise on a single inch of India’s territory. “We don’t want war with any nation and have always pursued the policy of peace but at the same time we will not allow any nation to annex our territory”, he added.
He said that India has a firm resolve in this regard and you would have seen that our forces are fully vigilant along China border.
Taking a dig at Congress and Nehru, he said previous rulers always made compromise with those countries which attacked India and annexed its land instead of taking on them forcefully. “But present Government led by Narendra Modi changed its policies altogether and it won’t allow any country to browbeat and dictate terms to us”, he added.
He said India has no borders with China and it is Line of Actual Control (LAC) as China has annexed our land. “We have borders with Tibet which too has been captured by China in fifties and Dalai Lama who could not accept Chinese hegemony took asylum in India and since then he is living here, ”Madhav added.
He said Dalai Lama himself admits that his body is Tibetan but blood in it is Indian as he has spent 60 years of his life in India.
Asserting that India is united, he said every inch of India’s land is pious for its people. “Though we belong to different regions and religions, speak different languages and our cultures are also different but we all are Indians and wedded to national cause which is supreme for us”, he added.
Madhav, while referring to annulling of Article 370, said that the dream of Kushok Bakula Rinpoche a veteran Ladakhi leader, Thupsang and Dorjay has been fulfilled by granting UT status to Ladakh. He said BJP is wedded to national cause and for the BJP nation is supreme than everything.
He said today a neighboring country is eyeing on our land and trying to annex it which it has been doing for years together but now India will never allow it to succeed in its designs. The people living across the border in Ladakh whom he met said that the land which they used for grazing their cattle earlier has been annexed by neighboring country decades back. This happened after then governments’ always made comprises on the India territory but this will not happen under Modi Government, he added.
Lauding the spirit of patriotism and nationalism shown by the people living in the border belt of Ladakh especially in the villages of Damchok, Chimor and Nemo along LAC, he said these people always kept the tri- colour atop in this belt and their importance is no less then Indian forces fighting the enemy on borders. This is an inspiration for all countrymen, he added.
Madhav also assured the people of Ladakh that he will take up the issue of restoring the powers to Hill Councils of both Leh and Kargil saying that the people of the region are patriotic to core and he will take up the issue with Union Government.
He said all efforts will be made to solve the problems of the people living in this border belt.
While referring to recent visit of PM Narendra Modi to Ladakh, he said no PM has ever visited to the border belt while nation faced hostilities from neighboring countries. But it is Modi who visited the border area to boost morale of the forces. With this he gave message to entire world that Indian people are solidly with its forces.
He also conveyed the message that India wants peace and it has kept the dialogue process also open but at the same time he made it clear that Modi is behind army to protect every inch of India’s land.
Madhav, while paying tributes to Dr Shyama Prasad Mukherjee said though he launched a nationwide movement for total integration of J&K with Indian Union after the independence of the country in 1947, said prior to independence he thwarted the game plan of founder of Pakistan, Ali Mohammed Jinah who wanted that entire Bengal should be part of East Pakistan and had Dr Mukherjee not taken on him and frustrated his design the Kolkata would have been part of Bangladesh today.
He accused Nehru for distancing Kashmir from rest of India by enforcing such laws which distanced Kashmir from rest of country. It was Dr Mukherjee who opposed this tooth and nail saying that there can’t be two rules in one nation, he noted.
He said Dr Mukherjee laid down his life for the unity and integrity of India and BJP worked to fulfill his dream.
MP Ladakh Jamyang Tsering Namgyal, senior BJP leader Haji Anayat Ali, district BJP presidents of Leh and Kargil and other leaders of the party paid tributes to Dr Mukherjee on the occasion.