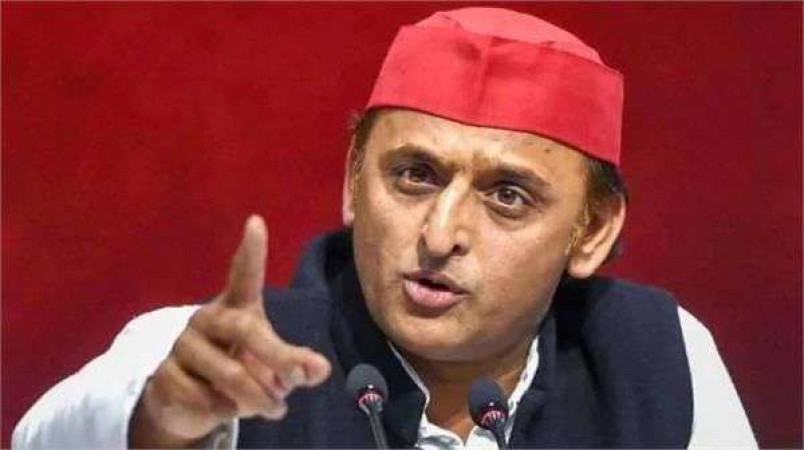 BAHRAICH (UP), Feb 23: Akhilesh Yadav on Wednesday said the Samajwadi Party-led alliance will score a double-century of seats by the fourth phase of Uttar Pradesh polls and asked people to ensure a historic win for the coalition.
He also took a dig at Union Home Minister Amit Shah over his reported promise of providing laptops to those who take “admission in Inter after passing class 12”.
Inter is the short form of Intermediate and refers to classes 11 and 12.
“There is a leader in the BJP who… Made a statement on distributing laptops and whoever heard it has gone ‘lotpot’ (split their sides laughing).”
“He said those who take admission in Inter after Class 12 will be given laptops. Good that he did not say those doing class 10 after Inter will get a laptop, else people would be perturbed,” Yadav said at an election meeting here.
Making light of the BJP targeting the Samajwadi party with new sobriquets, he said, “They are going A for this, B for that … And reading ABCD these days.”
“I want to make them learn Hindi… ‘kaka’ stands for ‘kala kanoon’ (black agri laws) which have gone and so will ‘Baba’ (Yogi Adityanath).”
Elated over the sizeable crowd in the meeting, the Samajwadi Party chief said many BJP leaders will become invisible after seeing this “‘jansailab’ (sea of people)”.
“The polling in the fourth phase will complete a double century for us. It is now the responsibility of the people to ensure a historic win for the Samajwadi Party-led alliance,” Yadav said.
Referring to the violence in the Lakhimpur Kheri district in October last year, he alleged that a minister’s son “mowed down farmers” and the government did not take any action initially.
“It was only after the pressure from opposition parties that action was initiated.
“The minister’s son has got bail from the court but not from the people’s court. People will get the deposits of BJP candidates forfeited,” Yadav said.
While elaborating on the poll promises of his party, the Samajwadi Party chief alleged the BJP was selling government properties and companies so that they do not have to give jobs.
He termed the ongoing elections as the one for saving Uttar Pradesh, the Constitution, democracy and the composite culture. (PTI)