JAMMU, Sept 24: Strongly condemning the brutal killing of a Block Development Council (BDC) chairman in Budgam district, All Jammu Kashmir Panchayat Conference (AJKPC) today said that such mindless killings would not deter elected Panchayat members from serving the people at grassroots level.
Talking to reporters here, today Anil Sharma, UT president of AJKPC, who visited the family members of martyred BDC chairman Bhupinder Singh, also questioned the government for its casual approach while dealing with the security of elected Panchayat members.
“We want to tell terrorist groups headed by Syed Salahuddin, Azhar Masood and their ilk that they will not succeed in their nefarious designs of derailing grassroots democratic institutions in Jammu and Kashmir. So far, 21 Panchayat members have sacrificed their lives for strengthening the grassroots level democracy and they will continue to march on this path till the last breath of their life,” Sharma said.
He said Pakistan’s ISI and its nurtured terrorist organizations have been unable to face the brave armed forces of India thus in a cowardice attempt they target innocent civilians and PRI members.
The AJKPC leader, while taking a dig at the Government alleged that the administration has compromised the security of Panchayat members as their concerns with regard to adequate security cover have remained unheard.
“It is quite unfortunate that film actress Kangana Ranaut was granted Y-Plus Category Central cover within a day on the other hand, elected Panchayat members who have been sacrificing their lives for the nation are being deprived of security. They have been voicing their concerns since long but the Government has always ignored them, reasons best known to authorities at the helm,” Sharma said.
He requested the Prime Minister, Narendra Modi and the Union Home Minister, Amit Shah to immediately direct the UT administration for a comprehensive security audit to ensure fool-proof safety of Panchayat members in all vulnerable areas.
“The killing of elected Panchayat members is a matter of concern for all. Family members of our Sarpanches and Panches are living under constant fear psychosis in such a hostile atmosphere. We appeal to the Prime Minister and the Union Home Minister to direct the UT administration for early conduct of a security audit so that all Panchayat members in vulnerable areas are provided adequate security,” the AJKPC leader demanded. 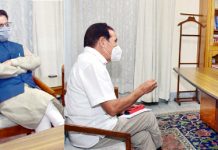