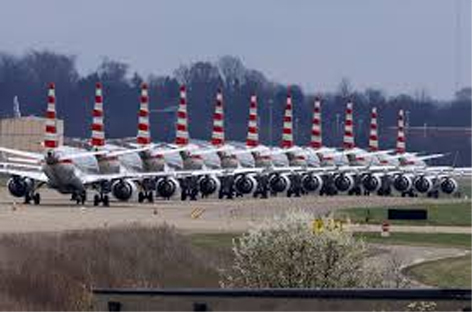 WASHINGTON, Apr 11: The Trump administration is proposing that a significant amount of the USD 25 billion in cash that airlines expected to keep workers on the job will instead be low-interest loans that big airlines will have to repay, according to two people familiar with the matter.
The Treasury Department began sending proposals for aid to airlines on Friday. American Airlines and United Airlines confirmed receiving responses to their applications for grants. They said they were reviewing the Treasury proposals, and they did not provide details.
Other major airlines either said they had not received proposals yet or did not respond for comment.
Negotiations between Treasury and the airlines were expected to intensify over the weekend.
As part of a USD 2.2 trillion economic-relief bill approved two weeks ago, Congress set aside USD 25 billion in grants and another USD 25 billion in loans for passenger airlines. The industry has been devastated by a plunge in travel caused by the coronavirus outbreak that has killed more than 100,000 people worldwide, including more than 18,000 in the United States.
CEO Ed Bastian said Delta Air Lines is carrying only 5% of the people it carried a year ago.
The Treasury Department said Friday that it received applications for relief from more than 230 airline companies, mostly small ones that want less than USD 10 million. Treasury said 12 airlines are expected to get payments of at least USD 100 million.
The department said that for small companies, it dropped a demand for financial considerations such as warrants or preferred stock to compensate taxpayers. But bigger airlines — the names that travelers are familiar with —would have to compensate taxpayers for the grants, which could be several billion dollars each for the four largest, Delta, American, United and Southwest.
One industry official briefed on the discussions said Treasury Secretary Steven Mnuchin talked to CEOs of the six largest airlines on Friday and indicated that airlines will get 70 per cent of their grant allotment in cash, but the other 30% will be loans at 1 per cent interest. A second official said loan portion would be “significant” but less than half of the grant allotment.
Treasury wants the airlines to offer warrants, which are securities that can be converted to stock, in exchange for the loans, said the people, who spoke on condition of anonymity to discuss the private negotiations.
Airlines and their labor unions object to the government demanding warrants in exchange for grants because Congress directed that the money only be used to pay workers’ wages and benefits — to qualify, airlines must avoid layoffs or pay cuts for employees until October.
President Donald Trump said Friday that his administration would help the airlines, which collectively had been making billions in profits until the virus hit.
“We have a great plan for the airlines,” Trump said at a White House briefing. “We’ve got to keep the airlines going. It’s never been a great business, but it’s a very vital business for the economy.”
Trump was once in the business himself, acquiring a fleet of planes in 1989 from the defunct Eastern Air Lines shuttle business and rebranding it Trump Shuttle. The venture never turned a profit, eventually defaulted and was later sold to USAir. (AGENCIES)