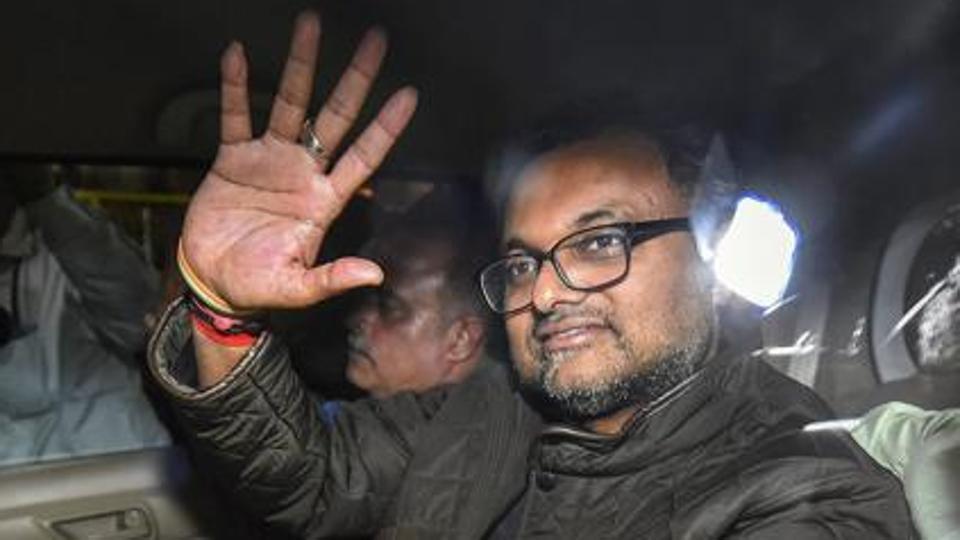 NEW DELHI: The CBI today moved the Supreme Court challenging a Delhi High Court order granting bail to Karti Chidambaram, son of senior Congress leader P Chidambaram, in the INX Media case.
The CBI has claimed in its appeal that it was “impermissible in law” for the high court to entertain Karti’s bail plea when an application seeking a similar relief was pending before the trial court.
The agency has also alleged that the high court had “erroneously” conducted a “detailed examination” of evidence on merits at the stage of bail which has seriously prejudiced the case of CBI.
“Further, the high court while granting bail (to Karti) failed to exercise its discretion in a judicious manner without ascertaining the nature of accusation, the nature of supporting evidence and the reasonable apprehension of tampering with the evidence in the present case,” the CBI said in its appeal.
A single judge bench of the high court had on March 23 granted bail to Karti, who was arrested on February 28 by the CBI, saying the relief should not be refused unless the crime was of the “highest magnitude” entailing “severe punishment”.
The high court had also observed that while there was “incriminating evidence” of a “nexus” between his then company Chess Management Services (P) Ltd and Advantage Strategic Consulting (P) Ltd, which had received a payment of Rs 10 lakh for allegedly facilitating the FIPB clearance to INX Media, it was not sufficient to deny bail to Karti as the payment was duly accounted for in the company records and was received by a cheque.
Karti was arrested from Chennai in connection with an FIR lodged on May 15 last year, which had alleged irregularities in the Foreign Investment Promotion Board (FIPB) clearance given to INX Media for receiving funds of about Rs 305 crore from overseas in 2007 when his father P Chidambaram was the Union Finance Minister.
Both Chidambaram and Karti have denied all allegations made by CBI, as well as the Enforcement Directorate.
The CBI had initially alleged that Karti received Rs 10 lakh as bribe for facilitating the FIPB clearance to INX Media. It had later revised the figure to USD 1 million.
In its appeal in the apex court, the CBI has claimed that despite the pendency of bail application before the trial court, Karti simultaneously moved the high court “in the garb of concurrent jurisdiction” seeking similar relief, which was granted to him.
It said that “curiously, despite the pendency of the bail application” before the trial court, which had posted it for consideration on March 15, the high court on March 12 entertained Karti’s bail plea.
“It was impermissible in law for the High Court to entertain the subject bail application when a bail application for the same relief was pending before the Special Judge, Patiala High Court,” the agency claimed.
It referred to section 439 of the CrPC, which deals with special powers of the high court or sessions court regarding bail, and said that concurrent jurisdiction was to be exercised by high court only in “rare and exceptional circumstances and not in a routine manner”.
“It is respectfully submitted that in the present case, no special and/or exceptional circumstances existed which warranted the exercise of concurrent jurisdiction by single judge of the High Court for granting bail to the respondent (Karti),” it said, adding that the exercise of jurisdiction by the high court in the case “suffers from patent and manifest error of law”.
Seeking to set aside the high court’s order, the CBI has claimed that the high court had carried out an “incomplete” and “erroneous” examination of statements of Indrani Mukherjee and another unnamed witness and recorded “highly prejudicial findings” against the agency.
“The impugned order of the High Court erroneously concluded that discrepancies have emerged in the statements of the witnesses under section 161 CrPC (examination of witnesses by police),” it said, adding, “the High Court unreasonably concludes that the statements of senior officers of FIPB under section 161 CrPC do not assign any specific role to the Respondent (Karti) in the alleged offence”.
It claimed that findings that the Chess Management Services and Advantage Strategic Consulting have an “intricate link” to Karti pointed towards larger conspiracy as alleged in the FIR.
The agency has alleged that while granting bail, the high court should have kept in mind the nature of accusations in the case, especially in light of economic offence which have deep-rooted conspiracies and involves huge loss of public funds.
“It is submitted that the High Court, in the present circumstances, after recording certain observations on the merits of the case, ought to have clarified that the said observations not affect the proceedings pending before any other Court of law,” it said. (AGENCIES)