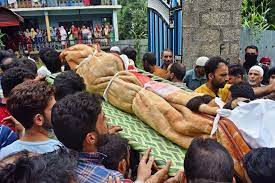 Completely at their wits’ end, puzzled, bewildered and shocked too over massive participation of people in Tiranga Yatras and holding of thousand of events and celebrations of the Independence Day in Jammu and Kashmir , militants at the behest of their mentors , in order to create a sensation and vainly attempting to neutralise the accumulated tempo of the people , two Kashmiri Pandits were fired upon by them in an orchard in Shopian in South Kashmir on August 16. The shootout resulted in the death of a Kashmiri Pandit almost on the spot while his brother got injured. Again, the satans in human form who resort to such killings of innocents got yet another shocker by the local people who by not only joining and sharing the grief of the bereaved family , taking part in the last rites of the deceased but protesting and raising slogans against such senseless killings healded the endgame of the militants in the very near future . Having said all that , the incident cannot be taken any lightly and needs to be properly analysed to adopt a proper strategy and employing a blueprint of a befitting action against recurring incidents of such nature of spilling of innocents’ blood.
We , at the outset , reiterate that Over Ground Workers (OGWs) play a diabolically active part in facilitating such killings as they are providing all types of logistics to the killers. A sustained campaign to identify and nab these persons is extremely important and must be treated on the same footings as the militants. Since the ISI and other elements from across the border in order to infuse a new spirit in otherwise waning and diminishing ranks of militants and their activities in Kashmir have been adopting new designs and strategies, the response too should be quite matching and with a much difference . They have not touched or harmed even a single tourist or even the devotee pilgrims to the Holy Amarnath Shrine in Kashmir. Instead ,they have been concentrating on selective killings of Kashmiri Hindus and non-local labourers which hardly needs any further elucidation as to why.
It is, therefore, no ”concern” to the persons wedded to the gun in Kashmir whether the target is one who never moved out of Kashmir even under worst and horrifying conditions of early 90s and later as in the present case. They , therefore, want to instil such a fear in the left out community members that they choose to bid adieu to their roots of thousands of years . Unfortunately, most of the aggrieved members are making easy the mechanisations of terrorists and their mentors by pleading with the authorities, “Take us away from here”. Agreed, it is the wearer alone who knows where and how much the shoe pinches but walking into the trap of these enemies of humanity is no solution but just to help and hasten their objectives coming true. Like this, the Kashmiri society shall in the long run be reduced to an absolute theocratic status. Without prejudice and without mincing words, young persons of the local majority community particularly serving in the Police Department too are selectively targeted by these enemies of humanity but no one from the bereaved families prefers to flee Kashmir. Why should they or anyone belonging to one’s roots leave and thus pave the way for these enemies of humanity becoming smooth.
We are given to understand that the District Administration had provided a four member security team to the family but unfortunately the victims are reported to have moved out without taking them along and such a casual approach needs to be avoided. The Government is duty bound to protect its citizens by employing whatever means at its disposal failing which it cannot be called a responsive and responsible Government . It is also a fact that it is absolutely impossible for any Government to provide pointed security to each and every person to thwart such attacks at any point of time and therefore , vulnerability can be taken care of by a vigilant , sharp and open eyed and watchful society . Unless the society resolutely girds up its loins in rooting out militancy , security forces alone cannot do that. Hence the ball is (more) in the court of the public.