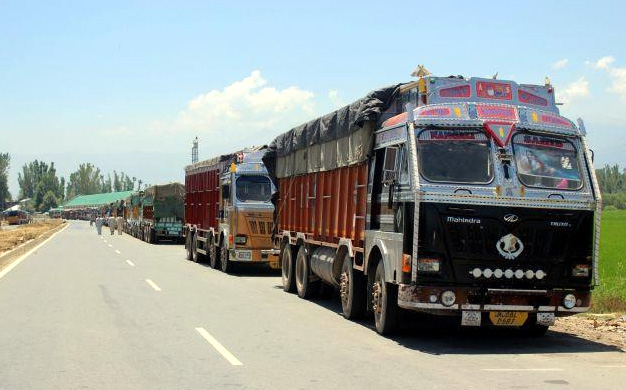 Fayaz Bukhari
Srinagar, Oct 18: After twin attacks in South Kashmir’s Shopian district in which a driver and an apple trader were killed earlier this week, the traders are facing shortage of trucks with result the truckers are demanding more money for transportation of apple outside Kashmir.
Despite lockdown and other problems faced by the traders, around 40, 000 apple trucks were sent to outside Kashmir markets since August 5. Director Horticulture Marketing and Planning, Ghulam Mohammad Dar, told Excelsior that over 7 lakh metric tones of apple were exported from Kashmir so far when last year it was around 10 lakh metric tones by this time of the year. He said that this year the harvesting season got delayed due to less rains in autumn.
Now after killing of a trucker, Mohammad Sharif Khan, on August 14 and an apple trader, Charanjeet Singh of Ferozpur in Punjab, on August 16 by militants, the apple traders are facing shortage of trucks to export their cash crop.
Police has directed the truckers not to go to interiors of the villages for loading apples in the trucks. The government has now established extra-loading points where more security would be provided for truckers and apple traders.
The president of the Fruit Growers and Dealers Association, Mohammad Amin, told Excelsior that with recent attacks and police advisory, the outside truckers fear to go to interiors to load the apples. “This has led to the increase in the freight. We were already paying Rs 60-70 more than the normal rate per box and for last couple of days we are paying Rs 10 more”, he said.
He said that besides this, the disruption in the movement of traffic on the National Highway is also causing shortages of trucks in the Valley. “For last over one week there has been lot of disruption on the National Highway due to construction activity which has led to trucks getting stranded on the highway for days together affecting its quality”, he added.
It may be mentioned here that not a single apple truck moved on the Highway on 11, 12, 13 and 17th October. On 11, 12 and 13 October, the traffic on the Highway was disrupted due to slides and on 17th October, there was movement of security convoys on highway.
On the loading points, the president of the Association said that it is not possible. “Under normal circumstances, half of the trucks were loading apples from the orchards only. Presently we need 300-400 trucks and for loading them at the loading points we need at least 3000-4000 small load carriers and where from we will get them”?, he asked.
Fayaz Ahmad, president of the Fruit Growers and Traders association in Sopore market, the second largest fruit market in the country, said that first the growers and traders suffered losses due to clampdown on communication. “Now the rates were better due to Diwali and all of sudden the attacks on the truckers and traders took place leading to shortage of trucks. The freight was up by 80 percent as compared to last year and now for last few days it has again increased leading to losses for traders and growers”, he said.