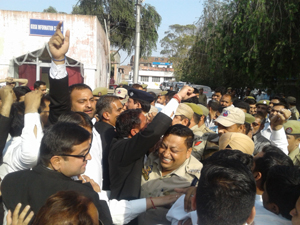 KATHUA, Apr 9: After a high voltage drama during the day the Crime Branch produced the preliminary challan of seven persons allegedly involved in Rassana minor girl kidnapping and murder case in the Court of Chief Judicial Magistrate (CJM) Kathua during late night hours today. Click here to watch video
The Court sent all the seven persons to District Jail Kathua while the challan of one juvenile who was among the first to be arrested by police in connection with murder of minor girl will be produced in Juvenile Court tomorrow.
According to sources, all the seven persons including former Revenue official Sanju Ram, his son, two cops of Hiranagar Police Station, two SPOs and another person were sent to the District Jail Kathua late tonight.
Earlier the CB could not produce the challan in the court of law during the day time as the Kathua Bar Association lodged a strong protest in the District Court complex. Agitating Bar members did not allow the CB sleuths to enter the court complex along with the arrested persons and forced them to beat a hasty retreat.
The Bar Association Kathua led by its president, Kirti Bhushan held a demonstration in the District Court Complex Kathua against the Crime Branch (CB) and State Government in Asifa murder mystery and reiterated the demand of CBI inquiry into the matter.
The protesting lawyers raising slogans against the CB and Government did not allow the CB sleuths to present the challan of the seven people including two policemen, two SPOs and a retired Revenue Official, his son and another person who are allegedly involved in the murder and kidnapping case of minor girl in the Court of law.
The members of Bar Association held protest demonstration against the Crime Branch when its sleuths came in the District Court with eight persons arrested by police in connection with the murder case of Asifa whose dead body was found in Rassana forests on January 17 this year after remaining missing for over a week.
All of them were arrested on the basis of allegation that they were involved in kidnapping, murder and destruction of evidence and they were brought under tight security cover in the court of CJM Kathua. But the Bar Association raised protest and shouted slogans against the Crime Branch and blocked their entry to the CJM Court. They did not allow the CB sleuths to enter in the court and produce the challan.
Ultimately, the Crime Branch sleuths were forced to return empty hands.
They returned to District Police Lines Kathua and kept all the arrested persons there till they were produced before the CJM in late night hours. The Bar Association members Kirti Bhushan ,president, Rajinder Kumar , Abhimanu , Rakesh Kumar  and Ajat Shatru Singh alleged that they are not satisfied with inquiry of Crime Branch and only CBI inquiry can give justice to the people of Rassana.  The lawyers condemned the attitude of Police towards advocates and alleged that police entered in court complex with lathis. They said that they are not against the police but the investigation process adopted by Crime Branch is condemnable as CB sleuths tortured the arrested persons.
They also demanded medical check up of all arrested persons and their statements be recorded before the Judge. They said that the Bar Associations is also supporting the Jammu bandh call on April 11 given by Bar Association of Jammu.
A big contingent of police was deployed in the district court complex to avert any untoward incident. SSP Kathua, Suleman Choudhary was himself monitoring the situation.
Meanwhile, Kathua Bar Association in a handout issued, later said that all members of the Bar have strongly agitated against the presentation of Challan by the Crime Branch in the Rassana case. “Known to all that the Bar is already on the strike against the investigation of the said case by Crime Branch of the State and strongly in favour of CBI inquiry, all members of Bar strongly condemned the conduct of the Crime Branch in dealing with the issue”, the statement added.
It further said that the State Government has failed to deal the issue or understand the sentiments of the people. The agitation of Bar proved successful and Crime Branch was compelled to go back, the statement added.
It said the CB could not produce the challan in the Court of law. The Bar further said that the agitation will continue and Bar will keep work suspended up to April 12. It appealed private School Association and civil society to observe bandh on April 11.