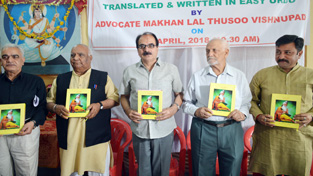 Excelsior Correspondent
JAMMU, Apr 3: Renowned scholar and chairman Jammu Kashmir Nationalist Movement (JKNM), Dr K N Pandita today said that the Ram Janambhoomi will be retrieved only after the people realise the importance and the significance of Lord Rama in Indian context.
Dr Pandita who was the chief guest at the release of Advocate M L Thusoo Urdu translation of Valmiki Ramayan at Sanjeevani Sharda Kendra here, today said even a great Muslim poet who played the key role in formation of Pakistan had described Lord Rama Imam-e-Hind and ” the day his (Rama’s) teachings are taken into right sense by people of this country all impediments in construction of Ram temple at Ayodhya will end”, he added.
The book was released at a joint function organised by JKNM and Kashmir Hindu Conference (KHC).
PK convener and a well known writer, Dr Agnishekhar and senior journalist and chairman Team Jammu, Zorawar Singh Jamwal were the guests of honour on the occasion.
The BJP MLCs Surindar Ambardar and Ajay Bharti also graced the occasion.
Former Excise Commissioner and a well known social activist, S K Koul read a detailed paper on the book. He highlighted the significance of Ramayan and the hard work of Advocate Thusoo in translating it.
P L Koul Budgami, convener KHC threw light on the book and life history of Advocate Thusoo.
P N Pandita former SSP managed the stage while the gathering comprised of intellectuals, K P leaders and social activists.
Speaking on the occasion, Dr Agnishekhar said Lord Rama is symbol of human values who thousands of years back integrated India to fight out external invader Ravana. Terming love for motherland more supreme than heaven, he said no one knows it better than exiled Pandits who have been forced to lead an exiled life by the enemies of humanity. He said Ramayana and Mahabharta are soul of India and those who have not read them can’t know any thing about India’s soul.
Team Jammu Chief and senior journalist Zorawar Singh Jamwal highly eulogized the work and contribution of Advocate Thusoo.
He said elders like Advocate Thusoo can prove role models for the younger generations. The Kashmir Pandit community has been highly inspired by the work of Advocate Thusoo, he added.
He said his organisation has launched a crusade against drug abuse and appealed people to join the same to rid the society of this menace. This can be a real service to society as per the teachings of Lord Rama, he added.
Earlier advocate Thusoo gave an introductory remarks about his work while the vote of thanks was proposed by P L Koul Budgami.