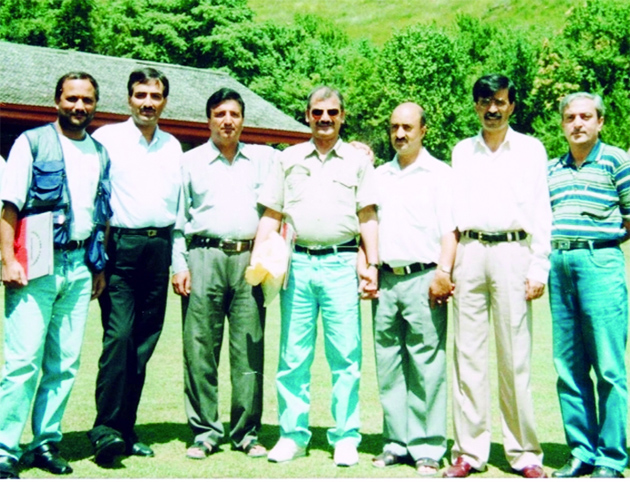 Ehsan Fazili
I do not really remember when I had my first meeting with him. Perhaps the migration from and to the Kashmir valley by both of us more than three decades ago, brought us closer, for we belonged to the same tribe of journalists. Ashok Pahalwan migrated from Kashmir in the 1989-90 exodus, and I returned from Jammu to Srinagar towards the end of the third quarter of 1990, then with The Kashmir Times.
Veteran journalists then, who had also migrated to Jammu included J N Sathu, Shyam Koul and M L Kak. My proximity with Ashok Ji, like many others with him, grew unconditionally over the years like the old saying that ‘friendship comes like sleep when you do not know’.
While we resided apart in the two capitals of the erstwhile State of Jammu and Kashmir, there was a unique bond of human relationship between us, like most of others of the tribe with him or other members from Kashmir belonging to other sections of society. Over the years I learnt that he maintained close friendly relations with many people associated with him prior to his migration to the hot environs of Jammu. His company at the Tourist Reception (TRC) in the heart of the (then) winter capital provided warmth to his visitors from Kashmir, both by dint of his overwhelming gestures and the soothing warm weather conditions in winters. His Room No: C-16 then used to remain abuzz with the visitors, who were being passionately and warmly welcomed and not allowed without a lively chat over cups of sweet tea. The location of meetings had later shifted to Room No. 123 in another block of TRC, which however, did not come in the way of his generosity. There was absolutely no shift in his hospitable gestures even as he was busy in filing news reports for the Reuters news agency from his office-cum-residential room. He would feel bad if anyone left without his courteous warm cup of sweet tea, and would hardly accept any gifts carried by any friends from Kashmir. His was a hedonistic approach to life with friends, nears and dears, under which he probably was trying to hide his sense of loneliness since he lived as single after the migration.
Though I scantly visited Jammu later during the 1990’s, it was out of question to return without visiting Ashok Ji during that stay. His hospitality did not restrict to his TRC room, but was equally more visible at a couple of marriage functions of KPs that we happened to attend together. He would also be the host at the Press Club, Jammu, which came up in the late 1990’s. He was surrounded by many other media friends at the Press Club, where he enjoyed a respectful rapport with its staff. Ashok Ji would not even miss to host at the Wazwan restaurant of JKTDC that came up later at the TRC.
During our meetings at his TRC room, he would hardly fail to mention about his days in Burbar Shah, Srinagar and the road from Srinagar to my area, Bandipore that passed through his home village of Safapore. Located at the midst of a 57 kms-long road, Safapore township has the famous Mansbal lake in its backyard. The journey by bus to and fro Bandipore virtually provided a social connectivity amongst the people from the entire areas. The veteran journalist, Shyam Koul, who passed away many years ago, also belonged to Safapore. Ashok Ji’s last visit to Kashmir was in 2004 summer during which we spent a couple of days together holding meetings as members of the then State Accreditation Committee of the J&K Government’s Department of Information and PR. He did not allow the pain of having been separated from his homeland to appear on his face, but remained calm and composed, exchanging friendly gestures with the people around in his usual manner.
My frequency of visiting Jammu during the past two decades receded further and thus, Ashok Ji’s hospitality. But, he hardly allowed it to come in the way of his personal rapport by way of exchanging good wishes at festivals. Even as he did not adopt to communicate via social media like Facebook and Whatsapp, Ashok Ji’s word power through a phone call or SMSs has been reflective of his sincere friendly gestures. He would hardly miss any occasion of Eid-ul-Fitre, Eid-ul-Azha, Shab-e-Qadre or the new-year to send his greetings in a unique manner. His last message received on the occasion of Eid-ul-Fitre on May 3 read: ‘May this Eid ul Fitre, bring happiness, good health and prosperity to you and to all your near and dear ones’. This followed the English translation of a verse from the Holy Quran:
“Behold the revelation of the Book from God, Almighty Omniscient!
Forgiver of sins,
Acceptor of repentance,
Grievous in punishment,
Boundless in bounty,
There is no god but He, and to him is the final return.”
Ashok Ji had his final return to God. May he rest in eternal peace. EOM.