E-Paper
Home National Activists arrested not for dissenting views but evidence links them with Maoists,... 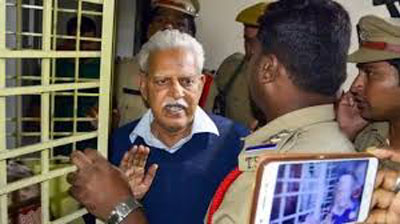 NEW DELHI, Sept 5: Maharashtra Government Wednesday told the Supreme Court that the five rights activists were arrested due to the cogent evidence linking them with the banned CPI(Maoist) and not because of their dissenting views.
The state’s response came in the backdrop of the apex court, while ordering the house arrest of the five activists on August 29 till tomorrow, categorically stating that “dissent is the safety valve of democracy”.
The Maharashtra police filed an affidavit in response to a plea of historian Romila Thapar and four others challenging the arrest of the five activists in connection with the Koregaon-Bhima violence case, claiming they were planning to carry out violence in the country and ambush the security forces.
The police said there was sufficient evidence to “dispel” the claim that they were arrested for their dissenting views.
While prominent Telugu poet Varavara Rao was arrested from Hyderabad, activists Vernon Gonsalves and Arun Ferreira were nabbed from Mumbai, trade union activist Sudha Bharadwaj from Faridabad and civil liberties activist Gautam Navlakha was arrested from Delhi.
The raids were carried out as part of a probe into an event called Elgar Parishad, or conclave, on December 31 last year, which had later triggered violence at Koregaon-Bhima village in Pune district of Maharashtra.
The police sought their custody and questioned the locus of Thapar, economists Prabhat Patnaik and Devaki Jain, sociologist Satish Deshpande and legal expert Maja Daruwala, dubbing them as “strangers” to the investigation in the matter.
“The petitioners, who are strangers to the offence under investigation, are also praying for bail on behalf of the persons arrested during an ongoing investigation, strictly in accordance with the Code of Criminal Procedure after the investigating agencies having gathered requisite incriminating material against the said individuals,” the affidavit said.
The police also told the court that the activists were part of the criminal conspiracy and active members of the banned CPI (Maoist), who had arranged public meetings under the banner of ‘Elgaar Parishad’.
The affidavit said the state was committed to protect fundamental rights of every citizen and a mere dissenting view, difference in ideology or vehement objections to political thinking, cannot only not be prohibited but should always be welcomed in any democratic country.
“Five accused persons for whose benefit the present petition is filed are not arrested based upon any dissenting views expressed by them or difference in their political or other ideologies….During the course of an intense investigation since January 8, 2018 (the date on which the FIR is registered), serious criminal offences are made out and incriminating material has emerged against them,” it said.
“This Court is dealing with persons against whom cogent evidence has so far come on record showing that they are active members of the banned terrorist organisation namely, CPI (Maoist), and they are involved in not only planning and preparing for violence but were in the process of creating large scale violence, destruction of property resulting into chaos (sic) in the society as per the agenda prepared by the CPI (Maoist), which was banned as a terrorist organisation in 2009,” it said.
The police also told the court that the five arrested activists were not being indicted in the FIR for the first time but some had past “criminal antecedents” and were imprisoned.
It said the whole process of search of the activists in June including Rona Wilson, Surendra Gadling, Sudhir Dhawale and others have been videographed.
“The material found from the computers/laptops/ pendrives/memory cards of the accused persons was shocking and clearly implicating the aforesaid persons not only as active members of CPI (Maoist) but clearly reflected an ongoing sinister design of having committed and in the process of committing criminal offences having the potential of destabilising the society,” the affidavit said.
The contents of the electronic devices seized from Wilson, Gadling and others showed their preparedness, planning and coordination with other activists to carry out a violent “ambush/rebellion against the enemy (which is our country and its security forces)”, the Mahrashtra government alleged. (PTI)