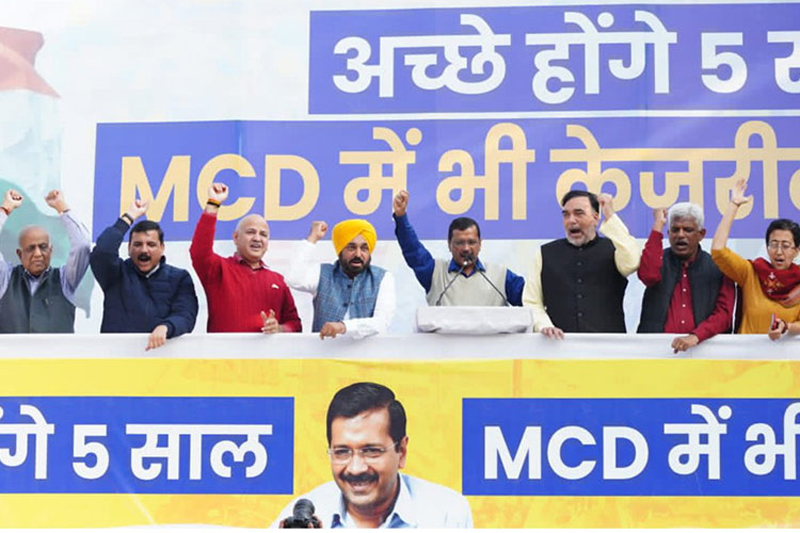 NEW DELHI, Dec 7:
The Aam Aadmi Party today won the Municipal Corporation of Delhi (MCD) elections with 134 seats, ending the 15-year rule of the BJP in the civic body, an outcome that will further impact the ongoing power tussle between the two parties in the national capital.
The BJP bagged 104 seats while the Congress was reduced to nine in the 250-member municipal corporation.
In his first address after the victory, an elated Arvind Kejriwal thanked the Delhiites and vowed to improve civic amenities in the national capital. He sought the “blessings” of the Centre and Prime Minister Narendra Modi to achieve that.
In a closer-than-expected contest, the BJP, which bucked the trend predicted by exit polls, put up a spirited fight, winning 104 municipal wards, while the Congress managed to win just nine seats, down from 30 in the previous civic poll. Three independents also won.
The BJP also managed to increase its vote share by three per cent as compared to the polls in 2017. It received 39.09 per cent of the total votes polled while AAP’s share also soared from 21.09 per cent to 42.05 per cent, according to the State Election Commission data.
In his address to party workers at the AAP office, the Chief Minister said the civic body will be rid of “corruption and bribery”. His deputy Manish Sisodia thanked the voters of Delhi and said it was their mandate that helped the AAP defeat the “world’s biggest and most negative party”. (PTI)