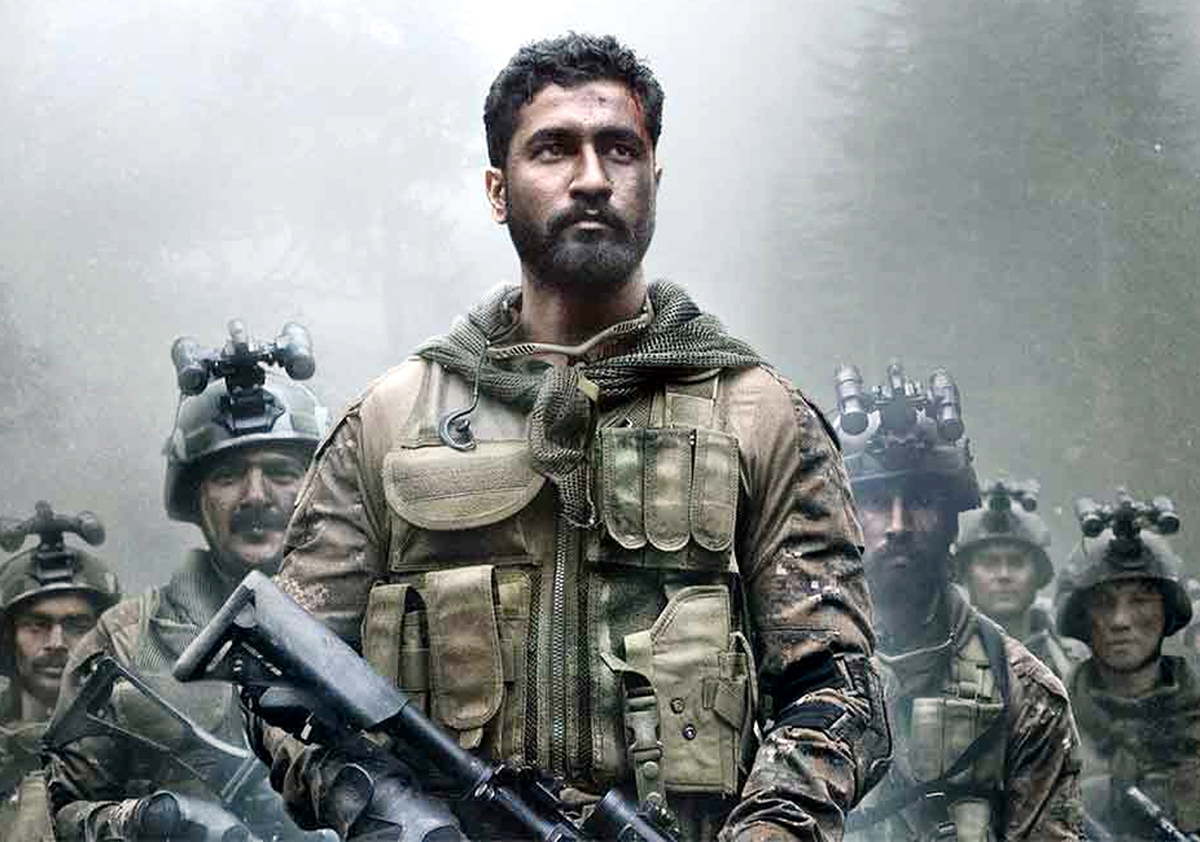 While we usher into the New Year, one hopes that this year will be better for Bollywood than the last. While 2018 was a rather tumultuous period for films, 2019 looks more promising. 2019 will open with the release of URI: THE SURGICAL STRIKE, a film based on true events of the Uri attack that shook the nation and the heroic revenge taken by the Indian Army by conducting surgical strikes across PoK.
But will the film that features Vicky Kaushal, Paresh Rawal, Yami Gautam, Kirti Kulhari and Mohit Raina entice the audience, is what we analyse.
URI: THE SURGICAL STRIKE is based on the true events of the surgical strike carried out by the Indian armed forces following the September 2016 Uri attacks, which was termed as one of the deadliest attacks on the Indian forces. The film opens depicting Indian soldiers being ambushed in Manipur, followed by retaliation by the forces on terror bases across the India – Myanmar border in the North East. From there, the story follows Major Vihaan Shergill (Vicky Kaushal), who seeks retirement owing to his mother’s ill health as she suffers from Alzheimer’s disease. In the meantime, Pakistani terrorist outfits carry out an attack at Uri Army Base camp in Kashmir. Vihaan’s childhood friend and brother-in-law Captain Karan Kashyap (Mohit Raina) along with some other fellow army mates are martyred in this attack. Following this, Vihaan is forced back by emotions to extract revenge by leading the strike force. Vihaan puts together a team to conduct the surgical strike under the guidance of PMO bigwig Govind Bhardwaj (Paresh Rawal) with special orders from PM (Rajit Kapur) himself. Special Agent Pallavi (Yami Gautam) helps Vihaan to detect the location of the launch pads and details of the target. And what follows is the execution of the surgical strikes across PoK.
Written and directed by Aditya Dhar, URI: THE SURGICAL STRIKE, similar to the Hollywood film, Zero Dark Thirty, is based on a true life covert military operation. Though unlike the Hollywood counterpart, which was completely based on true events and served as the revelation of what exactly happened during the operation, URI: THE SURGICAL STRIKE is fictionalised to a degree. However, URI manages to grip viewers with a telling story that inspires and entertains at the same time. For a first time feature film director, Aditya Dhar has done well in keeping the on screen proceedings tight and crisp. Dhar has managed to imbibe the essence of the film being an edge of the seat, gritty action thriller that keeps the audience gripped. While the first half of the film sets up the premise and details the story of the film, the second half is totally dedicated to the actual strike and action sequences.
As far was the writing goes, while the first half is a balanced mix of story, drama, emotions along with action, the second half is absolutely dedicated to action. The inclusion of a dramatic or emotional track in the second half could have elevated the overall effect of the film, at the same time diverting the audience’s attention and giving them a break from the nonstop action. But since the incident is based on real life, Indian audiences already have that angst against what occurred in Uri, and hence this flaw in the script gets covered up when the action scenes showing attack on the terrorist launch pads in Pakistan begins. Besides this in the second half of the film, one tends to feel that as a writer, Aditya Dhar could have paid more attention to the script, and researched in terms of what went on beyond the strike. The whole Garud drone concept seemed a little gimmicky and convenient.
Talking about performances, Vicky Kaushal has come a long way since his debut back in 2012. With noteworthy performances in films like Sanju, Raazi, and Masaan, Kaushal has slowly yet steadily built up an ardent fan following. This time too Vicky doesn’t disappoint as his performance in URI is spot on. His mannerisms as an officer from the armed forces who is solely focussed on one goal are bang on. His bravado performance and rigorous training to get into the role reflects on screen. Yami Gautam as Pallavi/Jasmine is severely underutilized as a special agent. Similarly, Kirti Kulhari as Seerat Kaur too is slotted in a minimalistic role. Paresh Rawal as Govind Bhardwaj, Mohit Raina as Major Karan Kashyap, Yogesh Soman as Ravinder Agnihotri, and Rajit Kapur as PM Narendra Modi have done well in their given roles. Though a special mention needs to be made for Raina who has done an exceptional job! On the other hand, Paresh Rawal’s character is repeatedly shown breaking cell phones, unfortunately the context and reason why is never shown.
In terms of music (Shashwat Sachdev), there is not much to expect. With just five tracks all of which are situational, one does not look for a chartbuster song in such a film. However, the Background Score (Shashwat Sachdev) is done well, and helps build the crescendo during climactic sequences. Action sequences are very well choreographed and form the backbone of this film.
Cinematographer Mitesh Mirchandani does a good job, especially during the action sequences. The editing by Shivkumar Panicker is crisp and keeps the film pacy.
On the whole, URI: THE SURGICAL STRIKE has a thrilling and a gripping narrative which instills patriotism without getting jingoistic. At the box office, the film will mainly appeal to the multiplex audience.
Courtesy : http://www.bollywoodhungama.com