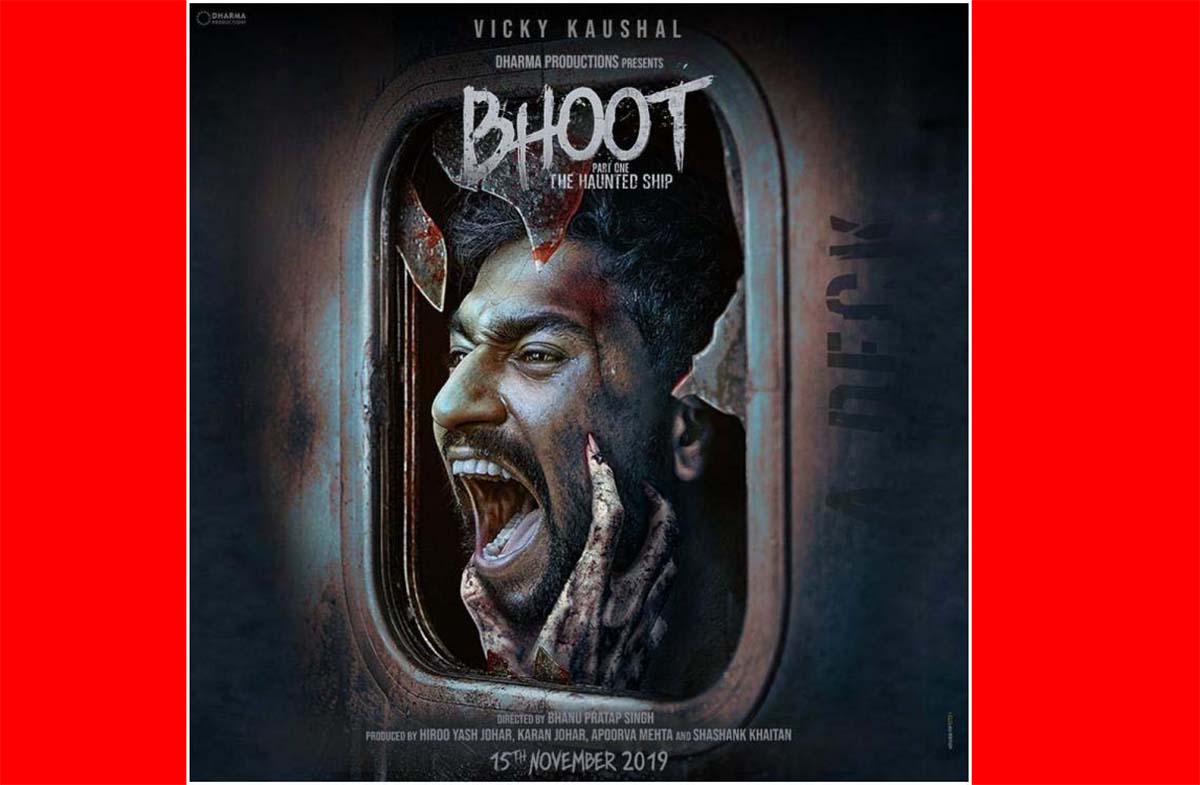 BHOOT: PART ONE – THE HAUNTED SHIP is the story of a man facing a scary situation while fighting the horrors of his past. The year is 2012. Prithvi (Vicky Kaushal) is a widower who has lost his wife Sapna (Bhumi Pednekar) and daughter Megha in a freak accident. He is depressed and is avoiding medication. In the midst of all this, an abandoned ship named Sea Bird gets stranded at Mumbai’s Juhu Beach. Prithvi works for a shipping company that is asked to take this ship back to the sea at the earliest. On his first visit to the ship, strange things occur and it makes him feel that the ship is inhabited. However he passes it off as his hallucinations and side effect of his state of mind. The subsequent visits however makes him sure that all this is not a figment of his imagination. During the third visit, he spots a girl at the hull of the ship. He also comes across log books and some video tapes dating back to the year 2001. As he sees the tapes, he realises that the captain’s wife (Meher Vij) and daughter Meera were also present on the ship. Gradually, Prithvi realises that the girl he encountered on the ship is Meera. He goes again to the ship and this time he comes face to face with Meera. But this time, she’s in a ghostly avatar. What happens next forms the rest of the film.
Bhanu Pratap Singh’s story is decent and could have made for a gripping scarefest. Bhanu Pratap Singh’s screenplay however is unimpressive overall. He gets the scare quotient right only in few scenes. Even in the main story, things are barely convincing. Bhanu Pratap Singh’s dialogues are passable.
Bhanu Pratap Singh’s direction is nothing great. He makes good use of his knowledge in creating a scary atmosphere. A few scenes are well executed. But most of the scenes fail to impress. Trouble begins in the first 15 minutes itself when a random couple is shown venturing into the massive ship undetected and playing hide and seek. The ship is ten storeys tall and this information is given by the makers themselves just few minutes before this scene. But no explanation is given how the lovers manage to climb atop the deck which is at such a height. This scene actually gave a clear indication that logic and common sense are not going to be the strong points of this film. And sure enough, the absurdities continue in the second half, especially the climax. Many questions are left unanswered and it is sure to baffle viewers when they come out of theatres.
BHOOT: PART ONE – THE HAUNTED SHIP begins on a fair note as Prithvi’s past and glimpses of the happenings on the ship in 2001 is depicted. The first half doesn’t have much of a story as such but it keeps you intrigued as the scary atmosphere is well created. A few jump scares also serve the purpose. The interval comes at a great point. Post interval, there’s some movement in the story and you actually get to know where the film is headed. Still, a few unwanted scenes are there, like Prithvi imagining that he’s talking to his dead daughter at the bank of a river. On the positive side, the scene in the church is excellent and one expects the film to go on a high from here. Sadly the climax is riddled with clichés and flawed developments that kill the joy completely.
Talking of performances, Vicky Kaushal is in good form. He looks very dashing and gets his act right, without going overboard in any scene. Bhumi Pednekar is decent in a cameo. Ashutosh Rana (Professor Joshi) is fine and gives one a déjà vu of his earlier performance in RAAZ. His character sadly gets a raw deal in the end. Akash Dhar (Riyaz) plays Prithvi’s best friend and has an important role. He is decent but again, he doesn’t have much to do later. Meher Vij has a superb screen presence but her performance suffers on account of bad writing. Sanjay Gurbaxani (Agnihotri) is average. The actor playing Amar looks a bit creepy which works well. The actors playing Meera and Megha do very well.
Akhil Sachdeva’s music has no scope. ‘Channa Ve’ is played in the opening credits. Ketan Sodha’s background score is horrifying and works. Pushkar Singh’s cinematography captures the mood very well. Aditya Kanwar’s production design is top-notch. The abandoned ship especially is well designed. Natashcha Charak and Nikita Raheja Mohanty’s costumes are realistic. Vikram Dahiya’s action is filmy and takes away the authenticity. Redefine’s VFX is first rate and adds to the horror factor. Bodhaditya Banerjee’s editing is dragging and could have been crisper. Ideally, this film shouldn’t have been more than 90 minutes long.
On the whole, BHOOT: PART ONE – THE HAUNTED SHIP suffers from a half-baked plot and a flawed narrative which leaves viewers confused. The end result is completely unconvincing, barring a few scenes that provide some chills. At the box office, it will be rejected by the audience. Disappointing!