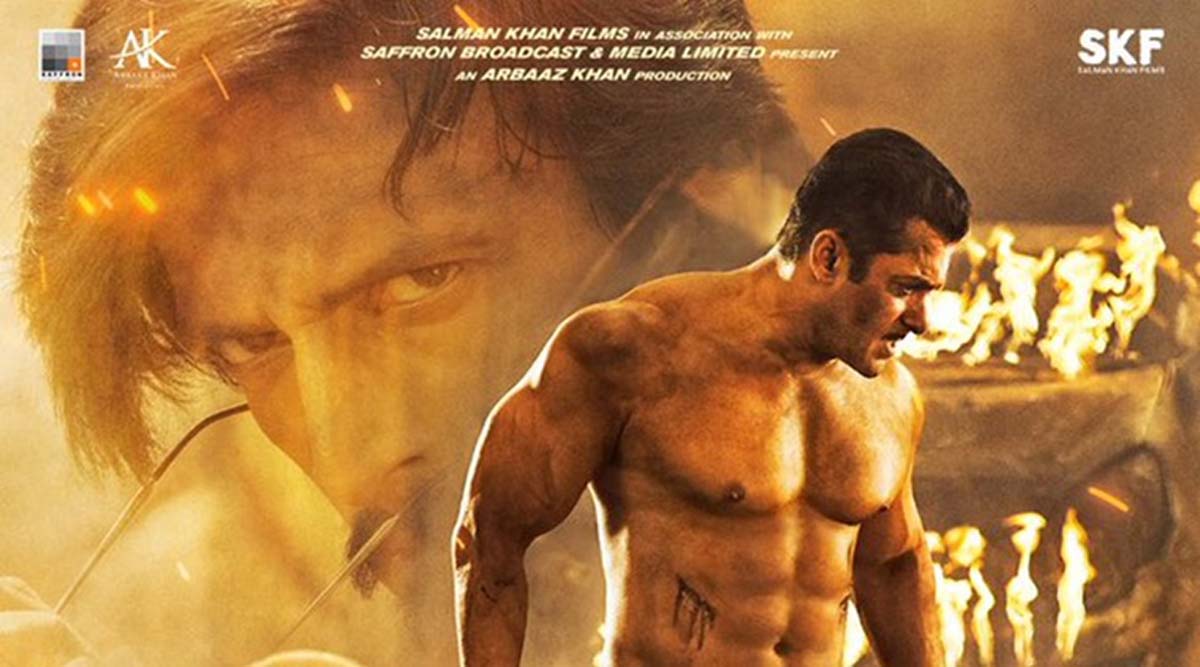 DABANGG 3 is the story of a badass cop. Chulbul Pandey (Salman Khan) is now the SP of a town named Tundla. As soon as he arrives, he nabs a bandman-turned-goon Guddu (Nawab Shah) and reforms him. He then busts a human trafficking racket under Chinti Valia (Dolly Bindra). The kingpin of this business is Bali Singh (Kichcha Sudeepa). As soon as Chulbul finds out about this aspect, he goes into a shock. Some repressed traumatic memories come alive in front of his eyes. The story then goes in a flashback mode. This is a time when Chulbul’s name was Dhaakar. He comes across the picture of Khushi (Saiee M Manjrekar). She was selected as the bride for Dhaakar’s brother Makkhi (Arbaaz Khan). But Dhaakar falls for her. He meets her and wins her heart with his progressive thoughts and of course, style. At the insistence of Khushi, he changes his name to Chulbul. The alliance was fixed and all was going well. One day Bali Singh bumps into Khushi and he falls for her. But when he learns that Khushi is madly in love with Dhaakar, he gets enraged and kills her in front of Dhaakar. On top of that, Dhaakar is jailed for the murder of Khushi and her parents. In the prison, he comes across a large hearted police officer Satyendra Singh (Sharat Saxena). He helps him get acquitted and also motivates him to join the police force. As soon as he turns cop under the name of Chulbul Pandey, the first thing he does is to throw Bali Singh down a cliff. He is presumed to be dead. Hence, Chulbul is shocked that Bali survived and is now back to challenge him. What happens next forms the rest of the film.
Salman Khan’s story is weak and beaten to death. He has such great characters at his disposal but he makes good use of them only partially. Salman Khan, Prabhu Deva, Dilip Shukla and Aloke Upadhyaya’s screenplay is effective but only in parts. The film keeps one engaged but again, the script suffers because of outdated storyline. What’s praiseworthy is how they have joined the dots. Audiences get to learn a lot about why Chulbul and other characters behave the way they do. Dilip Shukla and Aloke Upadhyaya’s dialogues pack a punch in most places. A few jokes however fall flat, especially the toilet humour.
Prabhudheva’s direction is average and again, the story is to blame. He tries to add something new but doesn’t succeed in all scenes. Also, there are far too many songs that hamper the film’s pace. And shockingly, an important mystery, with regards to Bali Singh, remains unsolved till the very end. It’s bewildering why the makers chose to do that
DABANGG 3 starts off on a fine note. The entry scene of Salman Khan as expected is whistle and clap worthy and in many ways, it’s the best part of the film. The manner in which Chulbul frees the trafficked girls and even teaches Chinti Valia a lesson will also be loved. The flashback portion too commences well and is also funny. But the Bali Singh track here looks very clichéd and outdated. Post interval, the film gets a bit better as Chulbul outsmarts Bali Singh. Again, most of the parts are predictable and of convenience. The climax fight will be liked by masses, particular the shirtless sequence bit of Salman Khan.
Dabangg 3 belongs to Salman Khan and he’s the one who makes the film watchable. The superstar is enjoying playing this part and it shows. His sense of humour is spot on. Also he looks dashing in the flashback portions. Sonakshi Sinha as expected lends support. She looks energetic in the songs. Newcomer Saiee M Manjrekar seems beautiful and tries her best. But her dialogue delivery is not upto the mark. Kichcha Sudeepa looks evil and menacing. But his track ought to be more terrifying for a better impact. Arbaaz Khan is fine and has a crucial part in the second half. Dolly Bindra is loud but suits her part. Nawab Shah is over the top. Pramod Khanna plays the part essayed by his deceased brother Vinod Khanna in the first two parts and slips into the role effortlessly. Bharat Dabholkar is wasted. Sharat Saxena is decent. Rajesh Sharma (S S Sharma) and Paresh Ganatra (Dabboo) try to be funny but don’t really succeed.
Sajid-Wajid’s music won’t have a huge shelf life. ‘Hud Hud’ is the best of the lot followed by ‘Munna Badnaam Hua’. ‘Naina Lade’ is sweet. ‘Yu Karke’ and ‘Habibi Ke Nain’ are forced. ‘Awara’ is not memorable. Sandeep Shirodkar’s background score is heroic and exhilarating.
Mahesh Limaye’s cinematography is spectacular and some scenes are well shot. Anl Arasu’s action is a bit gory but works. Wasiq Khan’s production design is appealing. Same goes for Ashley Rebello and Alvira Khan Agnihotri’s costumes. Ritesh Soni’s editing is not smooth, especially in the action scenes.
On the whole DABANGG 3 is a predictable revenge saga which capitalises on the star power of Salman Khan. At the box office, it has enough masala for Salman Khan fans which will result in terrific opening weekend [extending into Christmas holidays] post which it might face a slowdown at the multiplexes.
Courtesy : https://www.bollywoodhungama.com