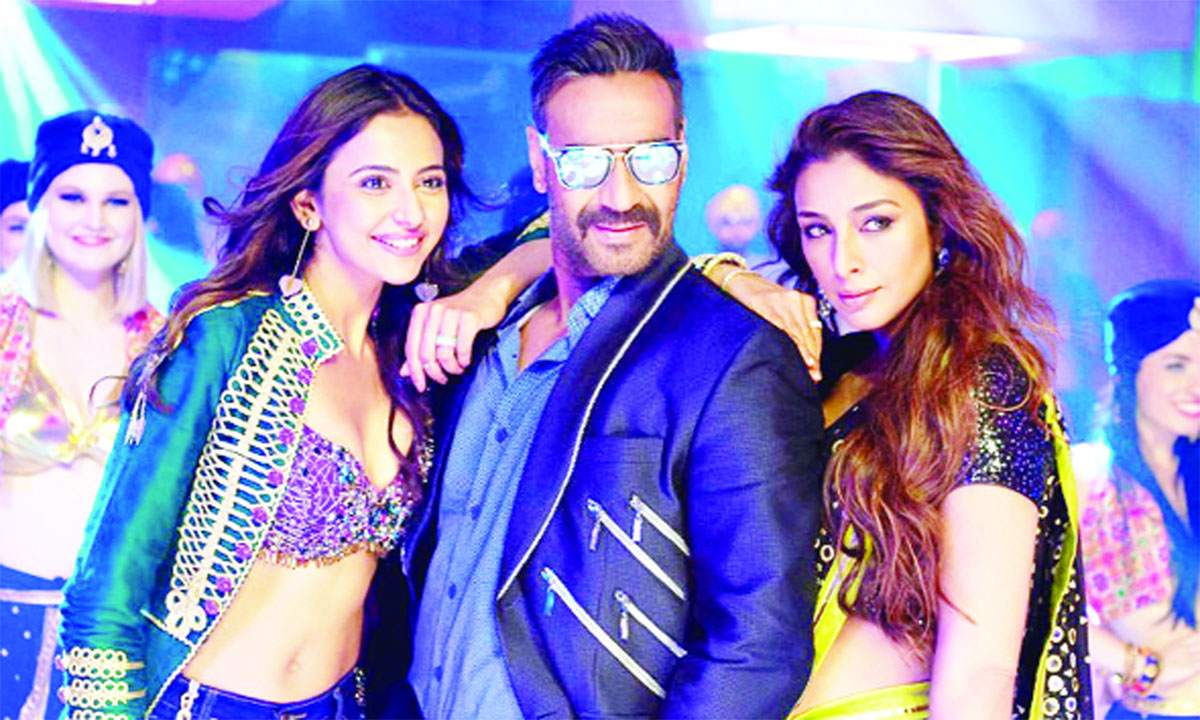 DE DE PYAAR DE is an unusual love story. Ashish (Ajay Devgn), 50, is based in London. He is separated from his wife, Manju (Tabu). At a common friend’s wedding, he comes across Aisha (Rakul Preet Singh) who is 26 years old. She is free-spirited and carefree and both she and Ashish get attracted to each other. In no time, she moves into his place. When the topic of marriage comes up, Ashish hesitates but realizing how much he loves Aisha, he agrees. He takes her to his hometown in Manali to get his parent’s approval. He decides to go there unannounced and as soon as he reaches there, all hell breaks loose. Ashish has not been in contact with them since years and hence his family comprising of Manju, daughter Ishita (Inayat), son Ishaan (Bhavin Bhanushali), father (Alok Nath) and mother (Madhumalti Kapoor) are startled to see him and that too with Ashish. Ishita gets livid as her to-be-father-in-law Atul (Kumud Mishra) is about to come to meet the family. She is petrified since she told Atul and her boyfriend Rishi (Rajveer Singh) that Ashish is no more! Ashish develops cold feet on seeing so much of negativity upon his arrival. What happens next forms the rest of the film.
Luv Ranjan’s story is entertaining and also quite progressive and mature. He gives a very important message but peppers it with entertaining and funny sequences to keep the interest going. Luv Ranjan, Tarun Jain and Surabhi Bhatnagar’s screenplay is also just right and very effective. There’s so much happening in the film every minute that throughout the 135 minute duration, one doesn’t get bored at all. A few sequences are unconvincing here and there but the plusses outweigh the minuses in a huge way. Tarun Jain and Luv Ranjan’s dialogues are as expected very well-worded, witty and funny. The lingo is of today’s generation and that is refreshing. The muting of abuses however is a downer.
Akiv Ali’s direction is quite good and as a first-timer, it is very praiseworthy that he has handled the film and its plot with sensitivity and finesse. The film is also a bit bold for the Indian audience due to the stigma attached with couples having unusually huge age gaps. Also, a sequence related to Raksha Bandhan might raise eyebrows. Same goes for the pre-climax twist. Hence, a section of moviegoers might get uncomfortable. But the writing along with Akiv’s direction ensures that it’ll be accepted and will be seen in the right spirit. Also, it reflects the changing times.
DE DE PYAAR DE begins on a rocking note. Aisha’s entry is smoking hot and the manner in which she develops feelings for Ashish is gradual and seems convincing. The track of Sunny Singh (Akash) adds to the fun. A surprise of the first half is when the laughter vanishes and the narrative gets moving. However, it doesn’t take the film down and prepares audiences for the fact that the film is not a laugh-a-minute caper. The intermission point is clapworthy and comes at an excellent point as one knows that from hereon, it’s going to be all fireworks. And that’s what happens in the second half. The madness goes on another level as Ashish gets attacked from all quarters. At the same time, it will also make viewers teary-eyed. The sequence where Ashish bats for live-in relationships and the effect it has on others is too good. But the best is deserved for the pre-climax and climax. Some unexpected developments take place and Manju’s outburst is seen to be believed. The film ends on a great note and there’s even a hint of a sequel!
Ajay Devgn is subtle and underplays his part beautifully. When it comes to comedy, in recent times he’s known for films like GOLMAAL where he is over the top. But in case of DE DE PYAAR DE, Ajay understands the space well and keeps the whole thing real and at the same time entertaining. In the initial scenes, he speaks with his eyes a lot without mouthing many dialogues and it creates a tremendous impact. And there’s a lovely SINGHAM surprise in the film which will make the masses crazy! Rakul Preet Singh shines like a star and it is her most accomplished work in Bollywood. She appears very confident as the hot bombshell and performance wise, she is spot on. In fact, she dominates many sequences of the first half. Tabu on the hand is the soul of the second hour. Her character is fleshed out very well and with her performance, she makes it even more special. Her part would be accepted with open arms and after ANDHADHUN [2018], this is yet another feather in her cap! Jimmy Sheirgill adds to the humour though in some scenes, his character seems a bit forced. Alok Nath seems to have sleepwalked from the sets of Luv’s previous film, SONU KE TITU KI SWEEETY [2018]. No complaints though as he’s funny. Kumud Mishra adds a lot to the film. Inayat is too loud and though that was the character requirement, she goes slightly overboard. Bhavin Bhanushali is adorable and his track too adds to the madness. Jaaved Jaaferi (Sameer) and Sunny Singh contribute to the laughter quotient in the first half. Madhumalti Kapoor and Rajveer Singh are okay.
Shashank Tere’s production design is rich and appealing. Niharika Bhasin Khan and Aki Narula’s costumes are glamorous especially the ones worn by Rakul Preet. Even Ajay and Tabu are styled nicely. Chetan M Solanki’s editing is praiseworthy as the pace of the film is neither too quick nor dragging.
On the whole, DE DE PYAAR DE is a paisa vasool entertainer with plenty of laugh aloud moments and strong emotions as its USP. At the box office, the film has the potential to work big time basis a strong word of mouth. Recommended!
Courtesy :https://www.bollywoodhungama.com/