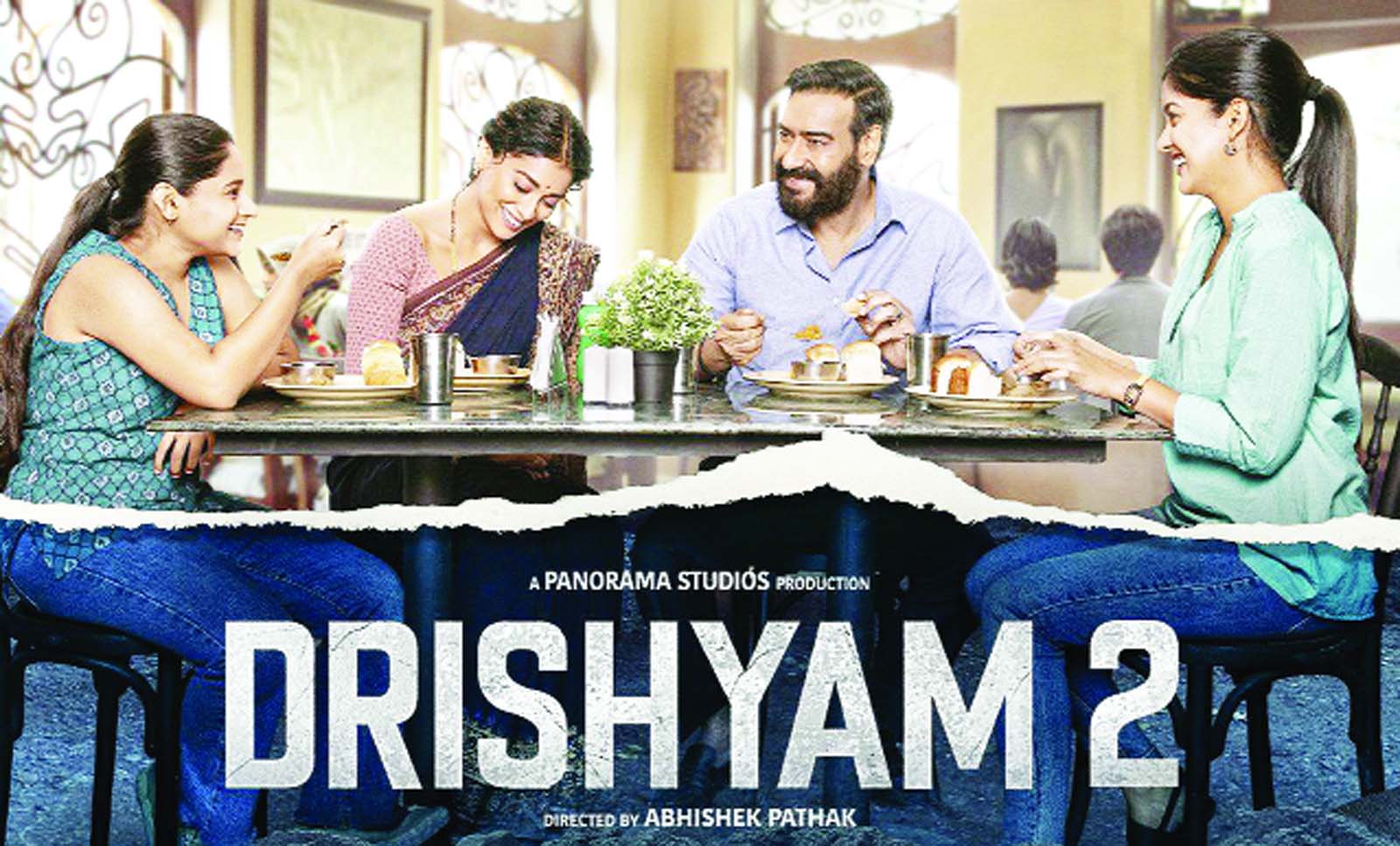 DRISHYAM 2 is the story of a family in crisis. The year is 2021. 7 years have passed since the events of the first part. Vijay Salgaonkar (Ajay Devgn) has fulfilled his dream of opening a cinema hall.
He still runs a cable network and resides in the same house at Pondolem, Goa. His elder daughter Anju (Ishita Dutta) is still traumatized over what unfolded 7 years ago and is seeking medical help. Vijay’s wife Nandini (Shriya Saran) is quite concerned and fears that things can go wrong anytime. She finds a confidante in her neighbour, Jenny (Neha Joshi). Meanwhile, Tarun Ahlawat (Akshaye Khanna) is appointed as the new IG in Goa. He’s a good friend of Meera Deshmukh (Tabu). She had settled in London and she and her husband Mahesh (Rajat Kapoor) return to Goa for their son’s death anniversary. Tarun meets Meera; he also studies Vijay Salgaonkar’s case and concludes that he’s lying through his teeth. Of course, without concrete evidence, the police can’t take any action. This is when Tarun chances upon an important clue. Soon, they get more information. Tarun and Meera are confident that this time, it’s time for Vijay Salgaonkar and his family to go to jail. What happens next forms the rest of the film.
DRISHYAM 2 is a remake of the 2021 Malayalam movie of the same name. Jeethu Joseph’s story is incredible as it does total justice and takes the story forward very well. Aamil Keeyan Khan and Abhishek Pathak’s screenplay is gripping and raises tension levels considerably. However, it’s too slow, especially in the initial and middle portions. Aamil Keeyan Khan’s dialogues are simple but sharp.
Abhishek Pathak’s direction is quite good, and he has improved a lot, compared to his last film, UJDA CHAMAN [2019]. He has added the required thrill, tension, and exhilaration in adequate doses. As a result, viewers will be glued to their seats from start to finish. He shows his brilliance in the climax.
On the flipside, the film suffers on account of the length. Nothing much happens in the first half. The intermission point comes too soon, and one might wonder if the film has anything worthwhile to offer after all. Secondly, a few cinematic liberties are hard to digest. Lastly, it’s very similar to the original version though thankfully, many haven’t seen it.
DRISHYAM 2 begins on an intriguing note. The problems faced by Vijay and how residents of the town believe that he is the murderer is well depicted. A few scenes stand out in the first half like Anju’s epilepsy episode, Anju confiding to Jenny, and Tarun’s entry. The intermission point is unexpected and gives some indication that this film also is a roller coaster ride. Post interval, Tarun meeting Nandini and his daughters is memorable. But the best is reserved for the last 30 minutes. The turn of events is completely unpredictable and will induce claps and whistles in cinemas.
Ajay Devgn, as expected, delivers a stupendous performance. He nicely gets back into the skin of the character of Vijay and gives no reason to complain. Akshaye Khanna is a great addition to the franchise. He is a scene-stealer thanks to his characterization and performance. Tabu is restrained and very impressive. Shriya Saran, Ishita Dutta, and Mrunal Jadhav (Anu) are dependable. Kamlesh Sawant (Gaitonde) and Siddharth Bodke (David) leave a huge mark. Saurabh Shukla (Murad Ali) is damn good in a cameo. Rajat Kapoor, Neha Joshi, Nishant Kulkarni (Shiv; Jenny’s husband), Yogesh Soman (Inspector Vinayak), Sharad Bhutadia (Martin), Ashmita Jaggi (Mary) and others are decent.
Devi Sri Prasad’s music is in sync with the film’s mood. The title track is great, followed by ‘Sahi Galat’. ‘Saath Hum Rahein’ is forgettable. Devi Sri Prasad’s background score is cinematic and exciting.
Sudhir Kumar Chaudhary’s cinematography is creative and neat. Tarpan Shrivastava’s production design is realistic. Navin Shetty, Sanam Ratansi, and Tanya Oak’s costumes are straight out of life. Amin Khatib’s action is not disturbing. Sandeep Francis’s editing could have been crisper. The 142-minute-long film should have been shorter by 15-20 minutes.
On the whole, DRISHYAM 2 is a justified sequel and gives a paisa-vasool experience thanks to the performances, script, and applause-worthy climax. At the box office, it has the potential to open in double digits due to the tremendous anticipation amongst the viewers to find out what happens next in the life of Vijay Salgaonkar. In fact, an entry into the Rs. 100 crore club cannot be ruled out. Recommended!
Courtesy : https://www.bollywoodhungama.com/