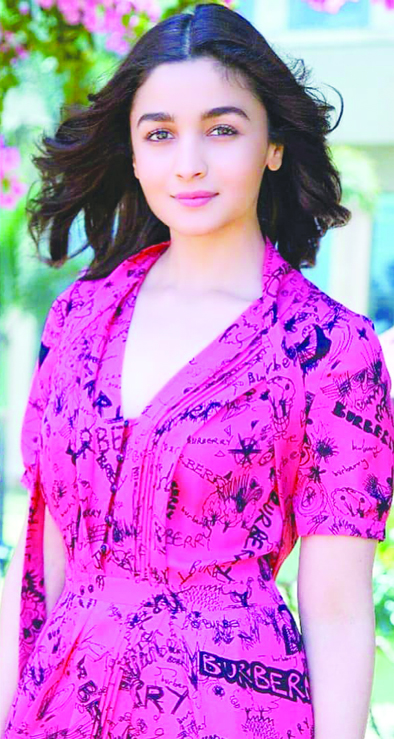 Bollywood actress Alia Bhatt  is seen in Meghna Gulzar’s much-awaited film      Raazi, which was released  on May 11.  The 25-year old actress is on a spree         to promote the film. She talks to our             correspondent :-
How was the chemistry between you and Meghna Gulzar?
Through and post the film, I realised that Meghna and I were the same persons because we feel the same thing and react to things at the same way. We just stopped communicating with each other as if a silent film was going on. So I feel confident to claim myself as talented and beautiful as a person as Meghna since both of us are identical.
How were the shooting experiences in Kashmir and Patiala?
The place where we faced issues (obstacles to shooting) was Patiala and not in Kashmir. There was a strike in Patiala due to Gurmeet Ram Rahim (self-styled god-man who was being convicted) and that’s why we faced some issues. Contrary to what people may believe, Kashmir is absolutely safe, it’s still beautiful, warm and people must visit the state because they are really missing out a beautiful experience.
How did you decide to do this film?
After I met Meghna (Meghna Gulzar, director) and I heard one line (of the script), it was very clear to me that this is the film I will have to be part of at any stage of my career. That time there was no clarity about the shooting schedule. Later the film was made under the banner of Dharma Productions and Junglee Pictures (production houses). It seemed that it was a perfect fit of three great creative minds (Dharma Productions, Junglee Pictures and Meghna Gulzar).
How much films like Raazi affect you?
Films like this (Raazi) do affect me because we were living with the film (Raazi) for 48 days. We were shooting nine scenes and fourteen hours a day. Even I couldn’t read a book because I was so tired. I was just sleeping and acting. In that way, the role becomes a reality and remains no longer a fictional character. After such a long schedule, suddenly the adrenaline goes out of my body. It’s more like getting over a serious relationship. So one has to get over it. I generally get into something else.
Did you follow any special process in the film?
I had to go through technical things since Raazi is a period film. I had to work on the pronunciation of Hindi and Urdu words to portray them properly (onscreen). I also made clear that if I don’t make my pronunciations proper in this film, I will be packing my bags and stay at home only (means leaving acting career). So I had to go through a process for a month where I learnt the pronunciation of the words for dialogues. Also I had to learn to drive a vehicle in the film. I had learnt driving earlier but on automated mode. Also I had to learn the mosque code. (IBNS-TWF)