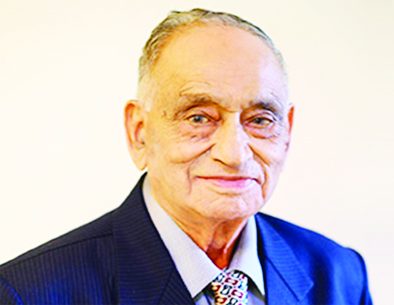 Ravi Rohmetra
Jammu has been blessed with many illustrious sons and daughters who made Dogras proud by their noble deeds. Justice K.K. Gupta (Retd) is one of them who quietly celebrated his 92nd birthday on 19th October. A legal luminary, he is well-known for his humility, well-mannerism and philanthropy and is still active at this advanced age for religious and social causes.
Born at Udhampur on 19th October 1930 in a respectable family of Shri Faquir Chand Gupta and Smt. Durga Devi, he had his early education at Udhampur but did middle class from the DAV School, Srinagar and 9th class from S.R. High School Jammu. After doing matriculation from Udhampur, he graduated in Arts in 1950 from a college. Thereafter, he obtained the Law Degree from Delhi University in 1952. Meanwhile, he was selected as Prosecuting Inspector and had police training at Srinagar during the course of which he was selected in KCS Judicial Service and started his career in judiciary as Munsiff, Ramban in 1960. He had served as Munsiff at various places before being promoted as Sub- Judge and then District and Session Judge. On promotion, he was posted as Chief Judicial Magistrate Jammu, Vigilance Commissioner, Registrar High Court of Jammu and Kashmir, District and Sessions Judge, Jammu and then of Kathua.
After his 28 years of distinguished service in the lower judiciary, K. K. Gupta was elevated to the J&K High Court as a Judge in August 1984 where he served with distinction for eight years, remaining its Acting Chief Justice for some time. His judgments reflected his boldness, progressive interpretation of the law and fairness. Justice Gupta was very popular with the Bar. While he retired from the J&K High Court in October, 1992, twenty-eight years ago, he continued to serve the society by remaining active in social and religious activities.
Seeking to utilize his judicial mind and fairness, he was made head of many Commissions. The Commission he headed include Delimitation Commission, J&K Backward Classes Commission, One man Enquiry Commission against Police Officials in 1997, Enquiry Commission against J&K Cabinet Minister Maulana Ansari and Commission to enquire into Shri Amarnath Ji Shivling Controversy in 2006. He was also made the President of the Dharmarth Trust and the Chairman of DhirenderBrahmchari’s Trust.
In Dharmarth Trust which was set up by the founder of Dogra dynasty, Maharaja Gulab Singh in 1846 as an endowment for religious charity and to manage and support Hinduism, Justice Gupta has a distinction to generating funds for renovation and maintenance of many temples in Jammu region as well as in Kashmir including Mata Kheer Bhawani and Shankaracharya temple despite militancy.
Justice Gupta has always taken keen interest in the affairs of his own community-Jandial, and dedicated himself to its betterment. As a Chief Patron of All Jandial Sabha he has been instrumental in the construction and re-development of the Devasthan of Baba Sehejnath ji at Gole Puli, Talab Tillo, Jammu. This is the sacred Devasthan of Jandial baradari to which he belongs. Under his dynamic leadership, the Devasthan is wearing an altogether new look with much improved amenities besides beautification of the main temple and the sanctum sanctorum.
He was also actively involved in the establishment of Justice Mehar Chand Mahajan Charitable Health Care Centre, Gandhi Nagar, Jammu. Both these institutions have been developed with public contributions for which he was the motivating factor.
Justice Gupta also remained Chief Patron of Akhil Bharatiya Mahajan Shiromani Sabha, Jammu Central Mahajan Sabha and Gandhi Nagar Mahajan Sabha Jammu. He is also a Chief Patron of Shiva Temple Trust, Railway Station, Jammu and Patron of Jammu Yatri Bhawan, Haridwar. As a person of clear mind and self-respect, left Dhirendra Brahmchari Trust which had a large property, when he found that some elements were making it controversial.
His guidance and blessings have been a beacon light for K.K. Group, a family business company. He has always shown his family the right path through which they could not only achieve financial success but also serve the society through charity and social work to our maximum capacity.
Married Vishnu Rani in 1950 at the age of 18 years, Justice Gupta has been a soft spoken, unassuming and helpful person, Justice Gupta always comes to aid of the needy and donates liberally for humanitarian causes. At 91 years’ age, he is a fully contented and God-fearing person and leads a simple and disciplined life that contributed to his cheerful looks and healthy mind. He spends almost all of the fore-noon in puja at his home.
His grandfather, late Sh. Shiv Ram was Tehsildar at Bhaderwah from where he was transferred to Srinagar where constructed a house at Tankipora. His father, late Shri Faquir Chand Gupta was an Accounts Officer who had served at Karachi, Hyderabad, Calcutta and finally at Delhi. He had three brothers and three sisters. His elder brother Sh. P.L. Gupta was Law Secretary in J&K who later joined the Union Ministry of Law, where he rose to the position of Joint Secretary. He was selected by the UN as Legal Advisor, and was posted at Trinidad Port and Sierra Leone. He had settled in the USA, and passed away there at the age of 94 but last rites were performed at Haridwar. His second brother Sh. D.R. Gupta was a businessman. His two sons were doctors and two in the legal profession. His elder son, Adv Sushil Gupta was Additional Advocate General and died at a very young age. His second son in the legal profession, was Justice V.K. Gupta of J&K High Court who too died in service.
Justice KK Gupta has two daughters and two sons. His both sons- Anil Gupta and Sunil Gupta are Electrical Engineers and retired as Chief engineer in PDD.His eldest son-in-law, CA Sudarshan Gupta is also no more while other son-in-law is Dr Rattan Kudiyar who is one of the most renowned Diabetologists and Endocrinologists of Jammu.