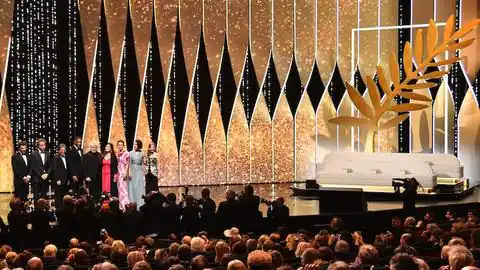 NEW DELHI, July 14: In a striking departure from norm, a cow is under the spotlight in a 93-minute observational documentary in the Premiere line-up of the 74th Cannes Film Festival.
Titled “Cow”, the film, which views the world through the eyes of its bovine protagonist, is directed by Oscar-winning English filmmaker Andrea Arnold.
The film was in the making for seven years. The editing, according to the filmmaker, was a three-year start-and-stop process because she kept working on other projects.
The British auteur is a three-time winner of the Cannes Jury Prize. The films that earned her the prizes are “Red Road” (2006), “Fish Tank” (2009) and “American Honey” (2016). Her Academy Award win was for the 2005 short film “Wasp”.
“Cow” is Arnold’s first-ever non-fiction film. It focuses on a single cow on a farm and follows its life cycle, watching it in a detached yet empathetic manner as it does its primary job – producing milk and calves – when she is not out to pasture.
About the essence of the documentary, Arnold says: “This is the story of a reality, that of a dairy cow, and a tribute to the immense service she renders us. When I look at Luma, our cow, I see the whole world through her.”
Addressing the media after the premiere of “Cow”, the director who has helmed several episodes of the Amazon Prime series “Transparent” and the entire second season of the HBO show “Big Little Lies”, said: “We usually see cows as a herd. I wanted to see a cow as an individual.”
When the idea first took shape, she had to write a pitch for the film.
“It is a hard film to explain. (The writing of the introduction) took me back to my relationship with nature as a child. That is where it started. I grew up on an estate surrounded by wilderness and I used to roam around a lot.”
“Cow”, she said, is an attempt to dispel the romanticised notion of nature that the world has.
“I wondered what reality is,” Arnold added. “It is a reaction to the disconnection from reality that we are all facing now.”
“We are sort of frightened of reality. I wanted to get in there and see what it is actually like,” she said. “The idea is to get people to engage with a non-human consciousness.”
Explaining why she chose to hold the film back for a Cannes premiere, she said: “I love it here. It is a fantastic place to have your film screened for the first time. And it is great moving from lockdowns to this. I am so happy to be inside a cinema hall again.” (PTI)