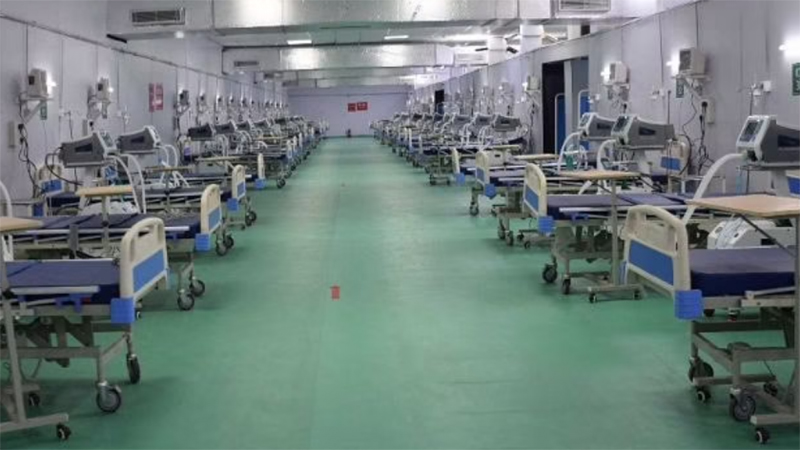 Suhail Bhat
SRINAGAR, Oct 19: Despite the passage of over 8 years since the project began, the 500-bed paediatric hospital in Srinagar’s Bemina area remains unfinished, with officials saying that the Out Patient Department block will open by the end of this month.
The doctors said that the facility’s untimely completion was denying the Valley’s residents access to high-quality child care. The hospital will not only strengthen paediatric facilities in the Valley, but will also relieve the burden of the patient load on existing facilities and provide high-quality maternity, neonatal, and paediatrics care to patients, according to the officials.
“The work on the hospital should have been finished by now because there is a severe childcare shortage in the Valley. But, as a matter of urgency, we hope that the facility is completed as soon as possible,” a doctor said.
Assistant Executive Engineer, Roads and Buildings Department, Syed Ishfaq, said the hospital will be completed by the end of the year. “The hospital is 90% complete, and at the current rate of progress, it will be handed over to the Health Department by the end of this year,” he added.
He said, however, that the hospital’s OPD block is complete and will be operational by the end of this month, saying: “We are in contact with the Health department, and the hospital is likely to open OPD services by the end of this month”, he said.
The hospital has been under construction for the past eight years, with officials blaming a variety of issues for the lengthy delay. The main reasons for the delay, according to an official familiar with the situation, were a lack of funds and the project’s repeated changes.
The hospital was originally planned to be 200 beded with only Maternity care, according to the official, and construction began in 2013 when the National Conference-led Government was in power.
Former Chief Minister Mufti Mohammad Sayeed, however, gave it an extension on October 17, 2015, when he laid the foundation stone for a 500-beded Mother-Child Hospital. The Government approved the conversion of this hospital into a full-fledged 500-bed Children’s Hospital in 2019.
The Government had set a deadline of 2015 for the completion of a 200-bed maternity care hospital, which was missed by the R&B Department, according to the official, who added that another deadline of April-May 2016 had been set for the completion of the first three floors, which included 200 beds. The same, however, was overlooked. As a result, the project’s completion date was pushed to 2017, but the construction company also missed the deadline. Since then, the construction has consistently missed deadlines.