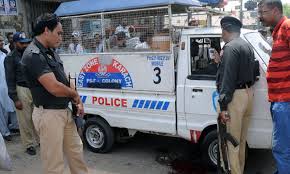 KARACHI, Jan 4: At least eight persons were killed in violence in Pakistan’s biggest city Karachi since early this morning, with three persons being shot dead in an incident of firing by unknown armed assailants.
Trouble broke out in parts of Pakistan’s Sindh province yesterday after the Mutthaida Qaumi Movement chief Altaf Hussain demanded a separate province for the Urdu-speaking population, which migrated from India during partition.
Violence broke out in the Gulshan Iqbal, Gulshan-e- Jauhar and Nipa chowrangi areas this morning with protesters stoning vehicles and resorting to firing after five other people were killed in other parts of the city.
The protesters, who also blocked traffic on roads, were demonstrating against Hussain’s remarks.
“Some people have been arrested this morning for firing and causing damage to property,” a police officer said.
Earlier, three persons, including two brothers, were shot dead at their shop at Maskan chowrangi in Gulshan-e-Iqbal.
Unknown assailants riding on motorcycles opened fire at a juice shop in which the owner and two workers – said to be brothers – were killed and four others injured.
Police claimed that the group involved in the attack was targeting Maskan Chowrangi and the adjacent areas, and the shopkeepers were instructed to close their shops at midnight.
Karachi, a city of 18 million people which contributes 42 per cent of Pakistan’s GDP, is rife with murder and kidnappings and has been plagued for years by ethnic, sectarian and political violence.
Pakistan’s commercial hub, Karachi is a stronghold of the Urdu-speaking Muhajir community which migrated from India during Partition. (AGENCIES)