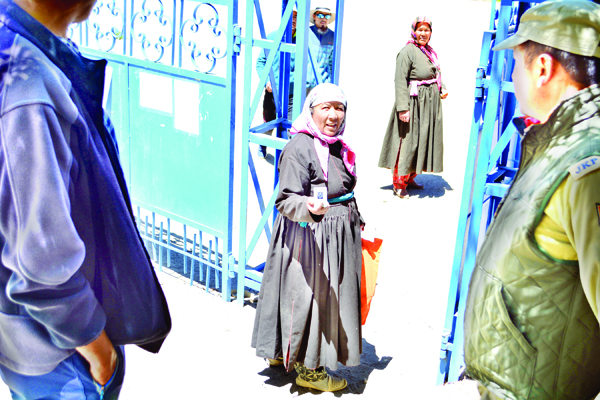 Excelsior Correspondent
LEH, June 4: About 64 per cent turnout was recorded for by-election to Thiksay Councilor seat of Ladakh Autonomous Hill Development Council (LAHDC), Leh, the election for which was held today.
The seat had fallen vacant following the demise of LAHDC Chief Executive Councilor (CEC) Dr Sonam Dawa Lonpo on January 29.
There were 4261 registered voters for the constituency and, of them, 2749 exercised their right to franchise including 1355 male and 1394 female.
Administration had set up seven polling stations including Nang, Rambirpur, Thiksay-A, Thiksay-B, Stakmo, Shey and Shey Yoknos. The highest turnout was reported at Rambirpur polling booth, where 69.38 per cent votes were polled. Lowest voting percentage of 57.55 was recorded at Nang.
The fate of four candidates was sealed in the ballot boxes. They included Tundup Gyatso (Congress), Stanzin Chosphel (BJP), Stanzin Phuntsog (National Conference) and Zahoor-ul-Hassan (Independent).
Counting of votes will be held on June 7.
Deputy District Election Officer Dr Udham Sharma said the voting was peaceful from 8 am to 4 pm with no untoward incident reported from anywhere. Ballot papers were used for casting votes.