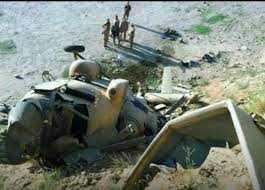 ISLAMABAD, Sept 26: Six Pakistan Army officials, including two pilots, were killed in a helicopter crash in southwestern Balochistan province, the military said on Monday.
The incident occurred near Khost in the Harnai area of the province on Sunday night during a flying mission, it said.
All the “six personnel on board, including 2 pilots” were killed in the crash, the army said.
No reason for the crash was given.
The accident comes more than a month after a similar incident occurred in Balochistan on August 1 when a Pakistan Army helicopter crashed, killing all six personnel, including a Lieutenant General, on board.
According to the army, the accident had occurred due to bad weather. (PTI)