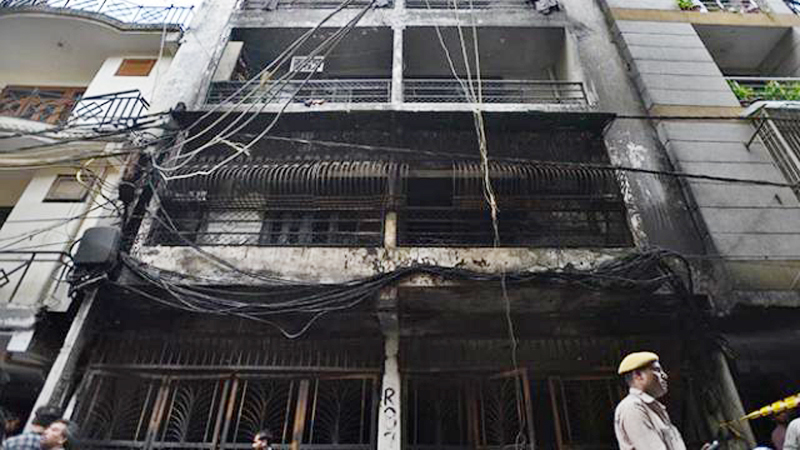 NEW DELHI, Aug 6: Six people, including three children, were killed and 13 injured in a massive fire at a four-storey residential building in a congested area in Southeast Delhi’s Zakir Nagar due to a short circuit in electrical wiring early on Tuesday, officials said.
Locals said the fire started at 2.30am when most residents were in deep sleep in the building that housed 13 flats.
Eight fire tenders were rushed to the spot shortly thereafter, the fire department said.
As the area is congested, fire tenders took some time to reach the spot, locals said.
The blaze was doused by 5.25am, the officials said.
Junaid, 27, a businessman who stays on the first floor of the building, said he had a narrow escape from the blaze as he jumped off the building in time. Residents on the first and second floor escaped while people on the third and fourth floor were trapped.
“The street was full of smoke after the fire. I was on the first floor of the building and escaped unhurt. People on the third and fourth floors were shouting for help,” Junaid said.
People panicked and jumped from their houses to save their lives, witnesses recalled.
“There was noise and cry for help in the area when the fire occurred late night. People panicked and started jumping from their houses and suffered injuries,” said Zeeshan (31), an engineer, who lives in the same area.
“With the help of fire fighters, we broke the wall of the third floor from an adjacent building and pulled people out of smoke,” he added.
The deceased were identified as Zoha (34), Nagmi (30), Arbaaz (6), Amna (8) and Zikra (8). Their bodies have been kept at AIIMS. The sixth body is yet to be identified and has been kept at Safdarjung Hospital.
The post-mortem was conducted at AIIMS mortuary and the bodies were handed over to their families, police said.
The injured residents are Athar (36), Faiz (20), Farukh, Adeeba (20), Saima (24), Shabha Bhatt (45), Rehan (9), Shabana (30) and Umar (30), officials said.
During the rescue operation, four fire personnel were injured. They are station officer Tarachand (59), two fire operators – Mohan Lal (40) and Dilbagh (39) – and leading fireman Ram Niwas (44).
Police registered a case under IPC sections 304(A) for causing death by negligence and 285 for negligent conduct with respect to fire or combustible matter.
Seven cars and 19 motorcycles were also damaged in the fire, they said.
Dr Mala, head of emergency ward at Holy Family Hospital, said people died due to asphyxiation and some were injured while jumping from the building.
Delhi Chief Minister Arvind Kejriwal visited the site and said the cause of the blaze would be investigated. He announced a compensation of Rs 5 lakh each to the families of the deceased and Rs two lakh each to the injured.
Lieutenant Governor Anil Baijal met the victims at Holy Family Hospital and expressed his deepest condolences to the families who lost their dear ones in the incident.
Baijal directed SDMC and Delhi police to take stern action against those found guilty of planning and developing the four-storied building in the congested area with no access for emergency services, according to an official statement.
Vijender Gupta, leader of opposition in Delhi Assembly, also visited the hospital.
Delhi Congress working president Haroon Yusuf said the Delhi Government should give a compensation of Rs 25 lakh to the families of each of those dead in the fire. He also demanded strong action against those responsible for negligence. (PTI)