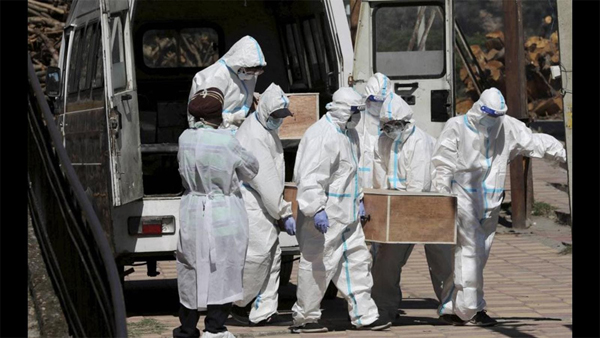 JAMMU, Jan 21: After spike in cases, COVID casualties also showed surge in Jammu division today with seven persons succumbing to the virus and ailments including five in Jammu district alone and one each in Doda and Rajouri districts while 1890 tested positive for the virus—1306 of them in Jammu district only.
Five senior IAS, IPS and JKPS officers today tested positive for COVID-19.
One of the IAS officers who tested positive for the virus is posted as Commissioner/Secretary in the Union Territory of Ladakh while another is posted in Jammu. The IPS officer is posted at Police Headquarters in the rank of SSP. A JKPS officer also in the rank of SSP deployed at Police Headquarters has been infected while another JKPS officer posted in the Anti-Corruption Bureau (ACB) has tested positive for the virus.
Ten more officials at the Civil Secretariat have been found positive for the viral infection. They were posted in Chief Secretary’s Office, General Administration Department (GAD), DMRRR, Estates Department, Public Works Department, Home, Planning, Higher Education and Assembly Secretariat.
Thirteen others were found infected by viral infection at the entrance of Civil Secretariat, the seat of the Government, during random testing by the Health Department.
Two more officials at the Raj Bhawan have also tested positive for Coronavirus.
Five persons tested positive at Aadhaar Card office.
Thirty seven pilgrims of Shri Mata Vaishno Devi Ji shrine also tested positive on their arrival at Katra Railway Station.
A 32-year-old youth from Janipura and two 80-year-old men hailing from Chinore and Talab Tillo, all in Jammu district, who were fully vaccinated but co-morbid succumbed to the virus at the Government Medical College (GMC) Jammu today.
A 70-year-old man was shifted by police to the GMC Jammu from Narwal Fruit Mandi in unconscious condition and he tested positive for COVID-19 posthumously.
A 68-year-old man from Gangyal in Jammu district and 55-year-old from Kalakote in Rajouri district, both of whom were fully vaccinated but co-morbid also died of Coronavirus in the GMC Jammu while a 78-year-old man hailing from village Champal in Bhalesa area of Doda district died of ailments and virus at Narayana Hospital Katra.
Among 1890 COVID positive cases in Jammu region, the highest 1306 were reported from Jammu district alone followed by 103 in Doda, 100 Udhampur, 99 Samba, 71 Reasi, 62 Rajouri, 61 Kathua, 48 Poonch, 22 Ramban and 18 in Kishtwar district.
As against 1890 positives, the daily recoveries also grew significantly at 819.
Jammu division now has 1,42,324 Corona cases. Among them, 1,28,481 have recovered from the virus while there were 11602 active positive cases and 2241 casualties.
The casualties include 1180 in Jammu district, 242 Rajouri, 157 Kathua, 143 Udhampur, 139 Doda, 120 Samba, 104 Poonch, 68 Ramban and 44 each in Kishtwar and Reasi districts.
Out of 11602 active positive cases, 7540 are in Jammu district, 1012 in Udhampur, 605 Kathua, 547 Samba, 448 Rajouri, 428 Reasi, 410 Doda, 342 Poonch, 167 Ramban and 103 in Kishtwar district.
District Magistrate Jammu Anshul Garg today declared three more areas as micro-Containment Zones.
The areas include Lane near F-695 New Plot Opposite Krishna building, Lane near A-17 near Kamla Palace at Vasant Vihar in Talab Tillo and Lane near H.No. 90, Ward No. 5 at Domail Morh, Barnai in Bantalab.
Meanwhile, the Union Territory of Ladakh today reported 149 fresh COVID positive cases including 125 in Leh district and 24 in Kargil district.
Ladakh now has 1047 active positive cases—871 in Leh and 176 in Kargil.
Corona count in Ladakh stood at 24034. Of them, 22765 have been treated while there were 222 casualties—164 in Leh and 58 in Kargil.