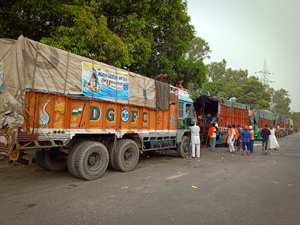 KATHUA, June 14: The authorities did not allow about 50 vehicles carrying the langers for holy Amarnath yatra which is commencing from June 28 to cross Lakhanpur yesterday for Baltal and other places enroute to cave shrine.
According to sources, all trucks carrying goods and other material for installation of free langers at Baltal and other places enroute to holy cave have not been allowed to move further from Lakhanpur the gate way of J&K citing security reasons as the main cause.
Sources said, scores of trucks carrying goods for langers were not allowed to move ahead since June 12 and about 50 such trucks are stranded at Lakhanpur in J&K and Madhopur in Punjab.
The action of State Government has generated a lot of resentment among the people and social activists doing free services in the langers. They also resorted to a strong protest at Lakhanpur today against the authorities. Shouting slogans against the Government they demanded immediate permission to all the vehicles which were halted by the authorities at Lakhanpur and Madhopur so that they can install the langers in advance for the pilgrims of holy cave.
Terming the authorities action as highhandedness they said the same will not be tolerated at any cost.
The protesters said the langer parties have been asked by the Shrine Board to report at Baltal on June 18 failing which their permission of installing langers will be cancelled.  The representatives of various organizations are installing free langers at Baltal, Pahalgam, Sonamarg, Nunwan, Panchtarni, Sheshnag, Sangam and other places enroute to holy cave.
They said this way the State Government was creating unnecessary hurdles in installation of free langers for holy Amarnath yatra. “We don’t know why the Government is always creating a controversy on langers and yatra”, said the representative of a langer camping at Lakhanpur for last two days.
The langer people and yatris add to the economy of the State and they take nothing from the Government in exchange. Instead of encouraging the pilgrims and langer people, the Government is harassing us and creating hurdles in our way every time which is unfortunate on their part, he added.
He said the authorities stopped us citing security reasons as main cause but how can the security increase in two days which we don’t understand.
Meanwhile, sources said that the Government has decided not to allow the movement of langers before the June 18 and in this regard a meeting of officers was convened by Divisional Commissioner, Jammu which gave orders to police not to allow the movement of langers prior to the date announced by the Government. Following the orders the district police stopped the vehicles at Lakhanpur and did not allow them to go ahead.