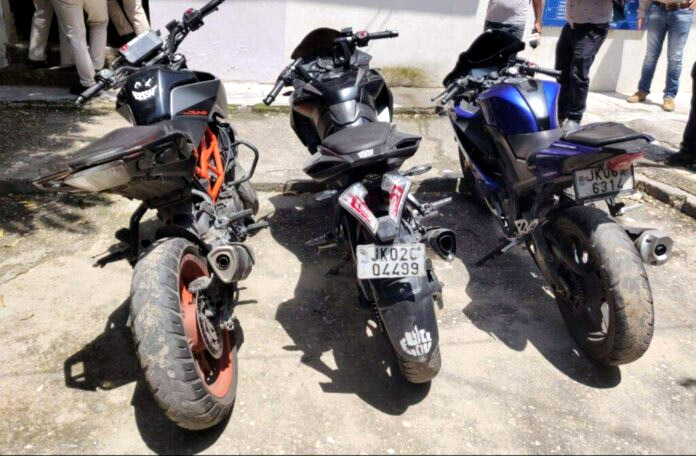 JAMMU, Dec 8: Police on thursday said that it has seized 21 bikes, booked five persons for doing dangerous stunts in Kishtwar district of Jammu division.
In a handout, the police said that in a bid to curb stunt biking menace and save thẻ precious life, Kishtwar Police arrested 21 stunt bikers and seized the bikes, who were performing dangerous stunts, scaring other road-users.
According to police spokesman, the arrested bikers were seen riding their bikes with just the back wheel on the grounds and performing other dangerous stunts, scaring other road users.
Acting swiftly and stringently police teams of Police station Kishtwar constituted headed by Insp Abid Bukhari SHO PS Kishtwar did strenuous efforts and after timely intervention finally nabbed 21 stunt bikers and seized their bikes, he said.
In this connection some bikers are booked under relevant sections of law and investigation taken up and some bikes were seized also under relevant sections of MV Act at PS Kishtwar, he said.
Moreover, Kishtwar Police strictly warns those misguided youths not to engage in such life threatening acts like bike stunts which can cause risk to their lives as well as the commuters, he said.
SSP Kishtwar also appealed such parents who let their underage children to drive scooties/ motorcycles etc to refrain from such negligent acts . He further said that the drive will continue till the violators get channelized to follow the traffic rules, reads the statement. (Agencies)