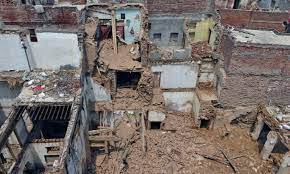 Islamabad, Sep 27 : At least five people were killed and 11 injured after a house collapsed in the Kurram district of Pakistan’s northwestern Khyber Pakhtunkhwa province, media reports said on Tuesday. According to the report, a double-story house affected by rain in Parachinar area of the district collapsed and buried the victims. Among the injured, seven were in critical condition and were being shifted to the provincial capital Peshawar for treatment, rescue workers told local media. The deceased included four children and a woman, (Agencies)