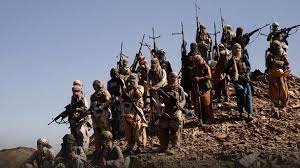 Karachi, Mar 8: Pakistan’s security forces on Monday killed five militants of the outlawed Balochistan Liberation Army in the country’s restive Balochistan province.
The militants of the separatist outfit were killed following an intelligence-based operation in Splinji area of Mastung district, a senior official of the Counter Terrorism Department (CTD) in Quetta said.
“They were planning a big terror attack in Quetta. Explosives, detonators and arms were recovered from their hideout,” he said.
The five militants were involved in carrying out attacks on labourers and security forces, the official said.
“When we raided their hideout, they opened fire on the police officials instead of surrendering,” he said.
Some militants managed to flee in the darkness.
The CTD claimed to have recovered 10 kgs of explosives, three detonators, two explosive rods, two grenades, three Kalashnikov rifles, 100 live rounds, one remote control device and 13 battery cells.
The terrorists belonging to outlawed separatist outfits stepped up terror attacks in the province at the weekend, according to the official.
On Friday, five labourers were killed and five others injured when their pick-up truck was hit by a roadside bomb in the Tandori area near Sibi town.
On Saturday, two personnel of the Pakistan Navy were killed and another injured when militants attacked their vehicle in the Ganz area of the Gwadar district.
In January, terrorists shot dead 11 coal miners of the Hazara community after kidnapping them in the Mach area of the province. (PTI)