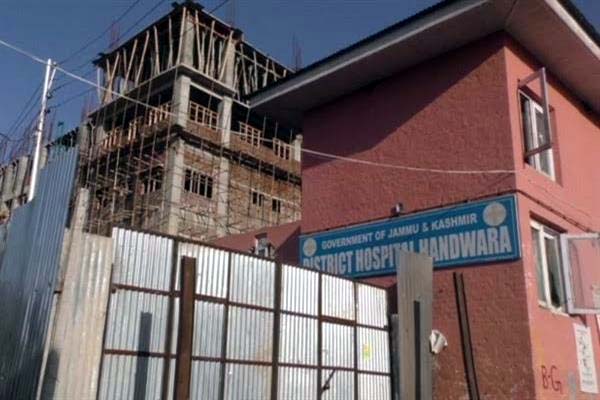 *3 storeys, OT to be handed over by April: Officials

Srinagar, Feb 21: Even as the construction of a new building of District Hospital (DH) Handwara was started at least 4 years ago, the building is yet to be handed over to the Health Department even as the executive agency is planning to make only half of it ready by April this year.
The officials of the J&K Housing Board told Excelsior that major works of the building have been carried out and currently the internal works are going on which shall be completed within the next few months and after that, they said, the completed portion will be handed over to the concerned authorities.
It is to be noted here that there is a severe space shortage which the hospital is currently facing even as the same is functioning from the building which is old and was constructed way back in 1984, lacks proper and required space due to which the patients are suffering while as the healthcare delivery is also taking a hit.
Also, the existing building was declared unsafe by authorities during an assessment survey that was carried out several years ago, prompting the Government to initiate the construction works of the new building which is adjacent to the old building.
Further, as per details, the work on the 350 bedded hospital was started in 2018 with the overall cost of the project being Rs 86 crore, however, under the phase-I, only Rs 46 crore were released while the rest was kept for the phase-II and are yet to be released.
The Health officials in the Sub-District told Excelsior that the matter of handing over the building to the department was recently discussed in a meeting with the Director of Health Services, Kashmir where the meeting was informed that around 90 per cent of works of the building have been carried out and the civil works have also been completed and currently the internal works are being carried out.
“The meeting was informed that by April this year 3 storeys of the 350 bedded hospital will be handed over to the department which is currently facing space issues,” officials said.
The J&K Housing Board officials, however, added that they are working to make 3 storeys and one Operation Theatre ready and operational by April this year and the rest of the works will be carried out after the funds under Phase-II are released.
However, the residents informed that there are severe infrastructural problems which the people are facing even as the old building is in shambles and lacks basic facilities.
They also alleged that for the last few months, the works have been suspended and that it does not appear that the concerned agency would complete the same in time, the claim which has been refuted by the officials.
It is to be noted here that the hospital was upgraded to the District Hospital level without having the necessary infrastructure and facilities in place and despite being a District Hospital, there still are several facilities that are not available at the hospital and patients continue to be referred to nearby hospitals or Srinagar for specialized treatment.