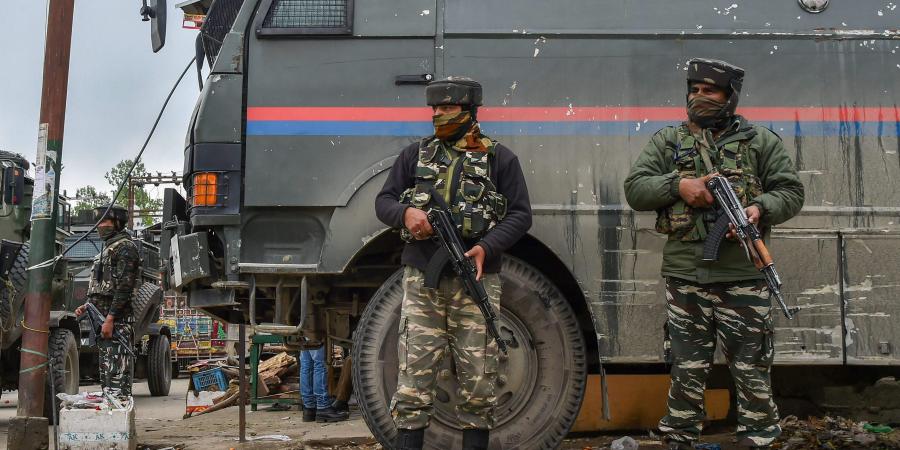 Click here to watch video
The operation was suspended last evening due to darkness. However, cordon was tightened to ensure that no trapped militant can flee and operation was resumed this morning.
The two militants were identified as Umar Thoker from Shirpora, Frisal, Kulgam and Tanveer Ahmad Khanday from Yaripora, Kulgam. Both were associated with Hizbul Mujahideen.
“Incriminating material including arms and ammunition were recovered from the slain militants,” an official said adding that keeping in view the prevailing pandemic due to COVID-19 and to ensure the safety of people from inherent risk of contracting the infection, the bodies of slain militants were buried in Baramulla.
Another encounter broke out at Harkipora, Kakapora, Pulwama in South Kashmir.
A police officer said that three Lashkar-e-Toiba militants were killed in Pulwama gunfight. Acting on a specific input about the presence of militants, a cordon and search operation was launched in Hakripora area of Kakapora belt in South Kashmir’s Pulwama district by a joint team of security forces including 50 RR of Army, CRPF and Pulwama police.
The hiding militants fired upon security forces which was retaliated triggering an encounter. During the initial exchange of fire, two militants were killed and the third one was repeatedly asked to surrender. However, he refused and fired upon forces which was retaliated and he too was killed.
“Bodies of three slain militants along with weapons have been recovered and identification of slain is being ascertained,” police said, adding that the militants were given a chance to surrender but they refused.
As per an official, they were affiliated with LeT outfit and were involved in the attack on CRPF at Pulwama yesterday.
“Incriminating materials including arms and ammunition were recovered from the site of encounter. All the recovered materials have been taken into case records for further investigation and to probe their complicity in other terror crimes,” police said.
The bodies were taken to Handwara and buried after completion of all medico-legal formalities.