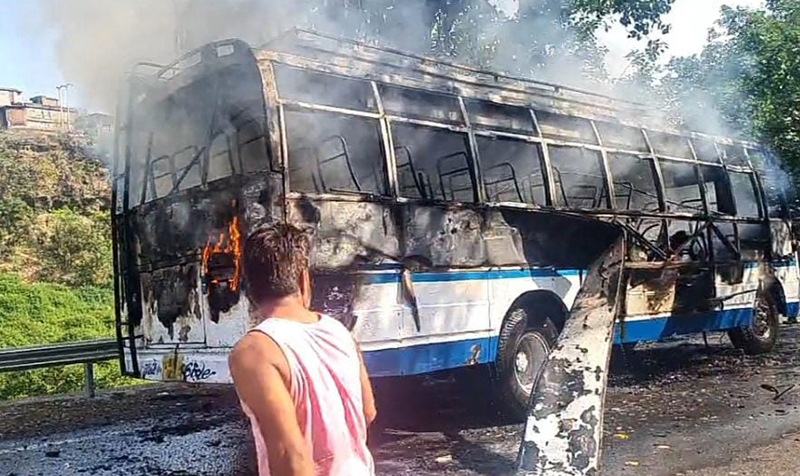 click here to watch video
The incident took place around 4.10 pm when the local passenger bus, which was on way from Katra to Jammu, caught fire near Kadmal area, which is about 1.5 km from Katra town, the base camp of Mata Vaishno Devi shrine.
According to ADGP- Jammu Range, Mukesh Singh, who visited the spot, the site examination does not hint of any blast while detailed investigation are undergoing to ascertain exact cause of fire. FSL team also visited the spot to ascertain the cause of fire.
SSP Reasi, Amit Gupta told the Excelsior that the single door passenger bus, bearing registration number JK14-1831, caught fire from engine area which soon engulfed the whole bus with the result four passengers were charred to death while 24 others sustained serious burn injuries.
Most of the passengers in the bus were pilgrims, hailing from Uttar Pradesh, Delhi and Haryana, who were on way to home after paying obeisance at Mata Vaishno Devi shrine, he added.
Police, led by Addl SP Katra, Amit Bhasin and SHO Katra, Nishant Gupta along with Fire Brigade and locals rushed to the spot and controlled the fire after hectic efforts. The injured persons were immediately shifted to Community Health Centre Katra where doctors referred them to GMC Hospital Jammu for advanced treatment. Condition of some of the injured, who have sustained multiple burn injuries, was stated to be critical.
Lt Governor Manoj Sinha has announced an ex-gratia of Rs 5 lakh each for the next of kin of those who have lost their lives in the unfortunate incident while Rs one lakh would be given to those seriously injured. He also directed the administration to ensure best possible treatment to the injured.
“Extremely pained by the loss of lives in the tragic bus incident in Katra. I offer my deepest condolences to the bereaved families and prayers for the speedy recovery of the injured,” the Lt Governor said.
Union Minister Dr Jitendra Singh, who represents Kathua-Udhampur-Doda Parliamentary constituency in the Lok Sabha, immediately after receiving information of the bus mishap at Katra, spoke to Deputy Commissioner, Reasi Babila Rakwal and said that all possible help, financially and otherwise, will be provided to the victims.
After visiting the spot, ADGP Jammu Zone, Mukesh Singh-alongwith other officers, went to GMC Jammu and enquired about the well-being of injured persons. He also assured that all help will be provided to the injured.
AICC Vice-President Rahul Gandhi and former Chief Minister of J&K, Ghulam Nabi Azad have also expressed their grief over the shocking incident. Rahul Gandhi has appealed the Congress workers in the area to provide all possible assistance to the injured and families of those who have lost their loved ones.
While identity of the deceased could not be ascertained as their bodies were burnt beyond recognition. The injured were identified as Komal (19), daughter of Sheetla Prasad of Lucknow (UP), Reela Devi (40), wife of Shiv Punjab Chouhan of Ghazipur (UP), Naresh Kumar (30), son of Madan Lal of Kadmal Katra, Radha Devi (38), wife of Ravi Kumar of Latori Katra, Ram Kumar (35), son of Shri Pal of Lucknow, Bunty (30), son of Arjun Ahriwar of Jabalpur (UP), his wife Rani Ahirwal (28) and their three-year old daughter Reyanshi Vaishnavi, Hemant Sharma (18), son of Ram Parwesh, resident of Gorkha Nagar Jammu, Tharu (60), son of Shankar, resident of Lucknow (UP), Shivpujan Chouhan (35), son of Bageshwar Chouhan of Gajipur (UP), his mother Sancheri Devi (52) and four- year old son Reesu Chouhan, Omwati (52), wife of Seeshpal of Faridabad (UP), her two daughters, 26-year old Jyoti Thakur and Kajal (20); Mana Devi (40), wife of Neeraj Sharma of Gorkha Nagar Jammu, Rajesh Singh (40), son of Ram Dev of Uttam Nagar Delhi, Bhim Sahu (46), son of Sukar Sahu of Faridabad, Sumitra (18) wife of Deepak of Gorkha Nagar Jammu, Ashok (29), son of Sameer, resident of Delhi, Joginder Singh (32), son of Munshi Ram of Billawar, Kajal (18), daughter of Niraj Sharma of Gorkha Nagar Jammu and Sangeeta (29), wife of Ashok of Delhi.