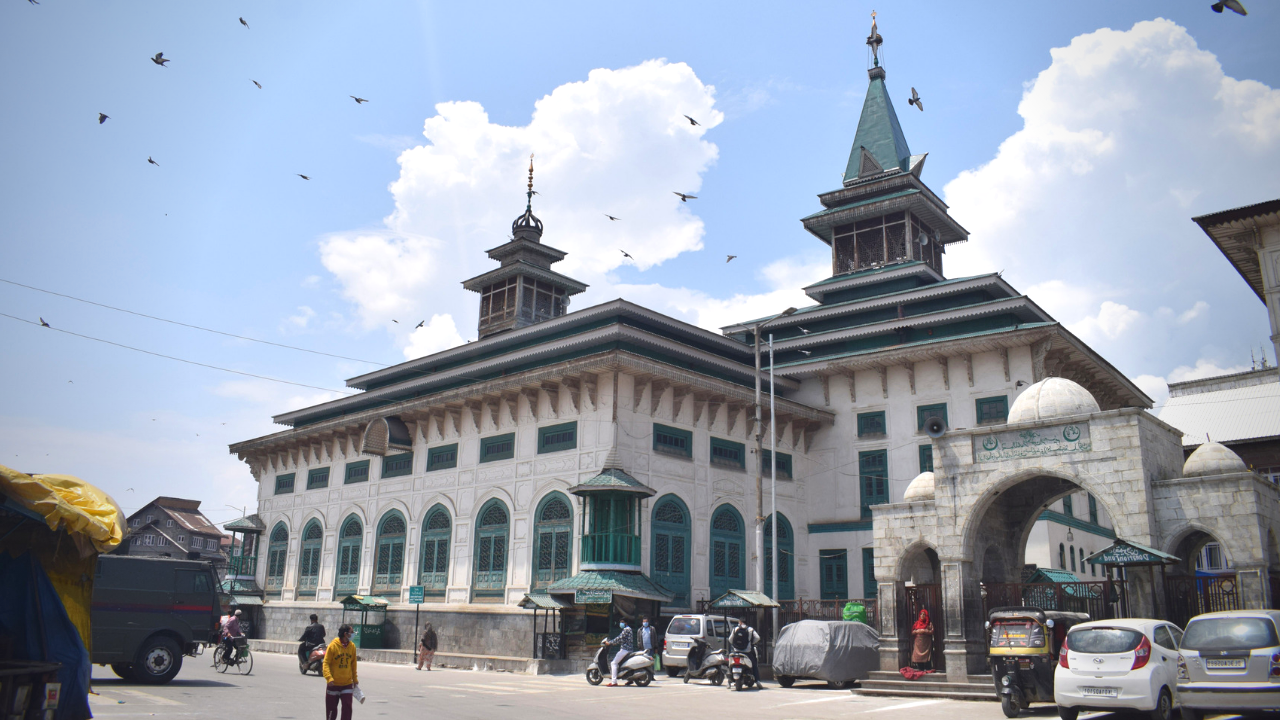 No Jumat-ul-Vida prayers in Kashmir due to Corona

Fayaz Bukhari
Srinagar, May 7: For the second consecutive year, no congregational prayers were held at major shrines and Masjids across Kashmir including historic Jamia Masjid on the occasion of Jumat-ul- Vida, the last Friday of fasting month of Ramadhan even as positive cases and deaths due to COVID-19 continued to surge across the Valley.
In Kashmir 3,575 tested positive for the COVID-19 today while 21 died here taking the cases in J&K to 206,954 and death toll to 2612.

The shrines and major Masjids across the Valley remained closed in wake of the lockdown imposed by the Government in order to prevent the deadly virus from spreading. This is for the second year that no Jumat-ul- Vida prayers were held in Kashmir due to COVID-19.
All the shrines and Masjid being taken care of by the Wakf board remained closed today due to the ongoing lockdown.
There were no Friday prayers held at Hazratbal shrine and Jamia Masjid Srinagar where major congregations used to be held on the occasion. However, prayers were held in local Masjids with thin attendance of people and following the SOPs.
And the Corona curfew continued to remain in place across Srinagar and other districts of J&K for the eighth straight day to prevent the deadly virus from spreading.
Police and paramilitary troops were deployed although in large number to enforce the lockdown restrictions. The barricades and concertina wires were erected at many places to stop public movement.
All the shops and business establishments barring emergency services, standalone shops remained closed throughout the day in Srinagar and other districts.
Inspector General of Police Kashmir Vijay Kumar today visited several places of Srinagar City and reviewed security and lockdown arrangements in view of Jumat-Ul-Vida.
He visited Jamia Masjid, Dargah Hazratbal and Lal Chowk areas of Srinagar city and reviewed security and lockdown arrangements of these areas.
The IGP Kashmir directed the officers to implementation of COVID-19 guidelines and SOPs strictly. Moreover, he also directed them to act strictly against those found violating them.
Police has arrested 43 persons, lodged 12 FIRs and also realized fine to the tune of Rs 70,010 from 480 people for violating the guidelines and rules throughout Kashmir.
“Besides, 24 vehicles were also seized in Budgam and Baramulla for violating COVID-19 norms,” a police spokesman said, adding that the special drive against the violators of COVID-19 guidelines and rules continued throughout all the districts of Kashmir valley to ensure that people adhere to SOPs and guidelines envisaged by Government to curb COVID-19 pandemic.
In Kashmir, 21 people died today due to COVID-19 taking the death toll in Jammu and Kashmir to 2612.
Those who died in Kashmir include a 61-year-old man from Dalgate Srinagar, a 78-year-old man from Rambail Pora, Anantnag, a 60-year-old man from Naibasti Anantnag, a 70-year-old man from S K Colony Anantnag, a 72-year-old man from Janglatmandi Anantnag, a 55-year-old woman from Boniyar Baramulla, an 80-year-old from Pulwama, a 68-year-old man from Makhdoom Sahib Srinagar, a 70-year-old man from Babhara Pulwama, an 80-year-old woman from Pinglish Tral in Pulwama, a 68-year-old man from Mallabagh Srinagar, a 65-year-old from Illahibagh Srinagar, an 80-year-old man from Safapora Ganderbal, a 60-year-old man from Illahi-Bagh Srinagar and a septuagenarian man from Sumbal in Bandipora.
Those who tested positive include 1,071 from Srinagar, 496 Baramulla, 384 Budgam, 118 Pulwama, 198 Kupwara, 568 Anantnag, 93 Bandipora, 169 Ganderbal, 344 Kulgam and 134 from Shopian.
As per officials figures, 51,361 positive cases including 597 deaths and 39,964 recoveries are from Srinagar, 15,480 including 211 deaths and 11,535 recoveries are from Baramulla, 12,967 including 9,968 recoveries and 136 deaths are from Budgam, 8,519 including 6,378 recoveries and 115 deaths are from Pulwama, 7,941 including 106 deaths and 6,434 recoveries are from Kupwara, 9,206 including 6,099 recoveries and 118 deaths are from Anantnag, 6,073 cases including 5,276 and 66 deaths are from Bandipora, 6,089 including 5,172 recoveries and 53 deaths are from Ganderbal, 5,894 including 3,347 recoveries and 70 deaths are from Kulgam and 3,691 including 2,797 recoveries and 44 deaths are from Shopian.
With fresh cases, the number of cases in Kashmir division has reached to 127,221 including 96,970 recoveries and 1,515 deaths.
The number of active cases in Jammu and Kashmir are 44,307 including 28,736 from Kashmir division.
With 2,752 more recoveries, the tally of total recoveries in Jammu and Kashmir has reached 160,035 which is 77.32 percent of the total cases.