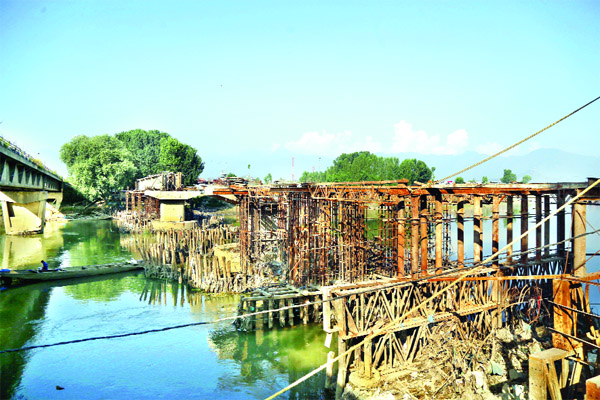 Waseem Ahmad
SRINAGAR, Aug 4: After missing several deadlines, three vital bridges over the river Jhelum in the summer capital Srinagar are still incomplete while people of the city continue to suffer.
Despite repeated promises about completion of the projects made by the executing agencies, the bridges that include Qamarwari bridge and Pandrethan bridge awaits completion for more than six years while Shalteng bridge more than 10 years.
Qamarwari bridge adjacent to other bridge popularly known as ‘Cement bridge’ which was constructed in late 70’s was sanctioned by Government in 2011 to reduce traffic congestion in the area and it connects large area including North Kashmir to two main hospitals of Kashmir, SMHS and SKIMS.
The work on the 127 meters long bridge which, according to Roads and Buildings (R&B) Department, costs Rs 9.85 crore was started in June 2011. Despite the end of second deadline, which was in the month of March this year, R&B department has failed to construct the bridge in the given time frame.
Qamarwari area is one of the most congested in Srinagar city and frequent traffic jams in the area have become a major source of inconvenience for the commuters. The bridge is an important link as it connects the Old City, Soura, Hazratbal and Ganderbal areas with North-Kashmir, Qamarwari and Batamaloo.
Barely five kilometers away from Qamarwari, another bridge at Shalteng area on the outskirts of Srinagar, constructed by Jammu and Kashmir Projects Construction Corporation (JKPCC), is incomplete after passing of over a decade since the construction work was started.
The construction work on 193 meters long bridge which would connect Goripora and Palapora areas with Srinagar-Baramulla highway with a revised estimated cost of Rs 1679.78 lakhs was started in November 2008 and has missed several deadlines.
The residents of Goripora and Palapora have to face immense hardships in absence of a motorable bridge in the area. “We were very happy when the work on the bridge was started as it was the lone motorable bridge that would connect us with the Srinagar-Baramulla highway via Shalteng. But more than 10 years have passed and the bridge is still incomplete,” Sameer Ahmad, a resident of Goripora said
Another bridge at Pandrathen area, constructed by JKPCC, with a total project cost of Rs 13.33 crores is awaiting completion for more than six years.
The construction of the120 meters double lane bridge connects areas like Lasjan, Soiteng and Padhshahibagh to Srinagar via National Highway. The locals from Soiteng, Lasjan, Padshahibagh, Athwajan, Pandhrethan, Batwara, Sonawar and other adjoining areas lamented Government’s lackadaisical approach towards the construction of the “vital connecting link” and charged them with showing indifferent attitude towards the people.
As per locals, the construction work is moving at snail’s pace and every time they raise the issue of the slow pace, the authorities would give different excuses.
Meanwhile, JKPCC officials blamed paucity of funds for the delay in the construction of Pandrethan bridge but expressed hope that it would be completed within a month. “The scarcity of funds as the main and some other minor problems hampered the initial pace of work but work is in full swing now and it will be completed by the end of this month. Pedestrians are already using the bridge and after a month, vehicles will also ply on it,” Deputy General Manager JKPCC, Zulfkar Ahmad Parray said.
About Shalteng bridge, Zulfkar blamed 2014 devastating floods, 2016 unrest in the Valley and adding of two more spans to the bridge for the delay in its completion. “The administrative approval for the bridge was 148 meters long but the addition of two more spans of 45 meters delayed the construction of the bridge. The cost for the construction of the bridge was revised thrice as we added two more spans to the bridge. Besides, the proposal for the bridge was one-way but it was changed to two-way. That was the main reason for the delay in the project. Hopefully, It would be completed by the end of September this year,” he said
An R&B department official, when contacted, regarding the Qamarwari bride, claimed that devastating floods of 2014 in which almost whole Srinagar got submerged and acquisition of land was the main reason behind the incompletion of construction of the bridge.