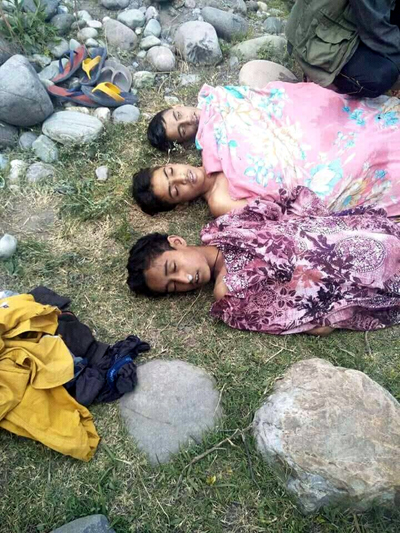 Excelsior Correspondent
POONCH, May 28: Three minor school boys were drowned in a river near Poonch city this afternoon.
A senior police officer while giving details said that these teen aged boys were the students of Christ School, Poonch. After school closed at  around 2 pm, the boys reportedly went to take bath in the nearby river on foot. They did not know how to swim.
Click here to watch video
While bathing in the river near a big rock, where a water pond of still water had been created, the boys started taking bath and trying to swim. One of  them started drowning. The other two boys tried to save him but one of them also  slipped in the deep water, while third one while saving two others also got trapped in the deep water and drowned.  A villager watching this from a distance, rushed there and also raised alarm, but the  boys had already been drowned.
The police party and locals of the area also gathered at the river site and then they fished out all the three bodies. The boys could not be saved.
The deceased were later identified as Musarat Hussain (16), son of Khalil Ahmed; Mohd Imran (15), son of Mohd Tariq and Mohd Ikhlaq (13), son of  Abdul Ahad, all residents of  Kamsar, Poonch.
The bodies after post-mortem and completion of legal formalities were handed over to their respective families by police. The police has taken cognizance of the matter.