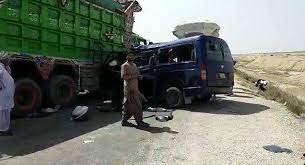 ISLAMABAD, Aug 11: At least three people were killed and 10 others injured in a collision between a truck and a van on Thursday in Khairpur district of Pakistan’s south Sindh province, local media reported.
According to the reports, the truck hit the van in the wee hours at the Mehran National Highway, resulting in the death of three people on the spot.
Rescue teams reached the site and shifted the victims to hospitals. The ill-fated van was going from Sindh’s capital city Karachi to Khairpur, the reports said.
Road accidents frequently happen in Pakistan, mainly due to poorly maintained vehicles, dilapidated roads and negligence of road safety measures.
(UNI)