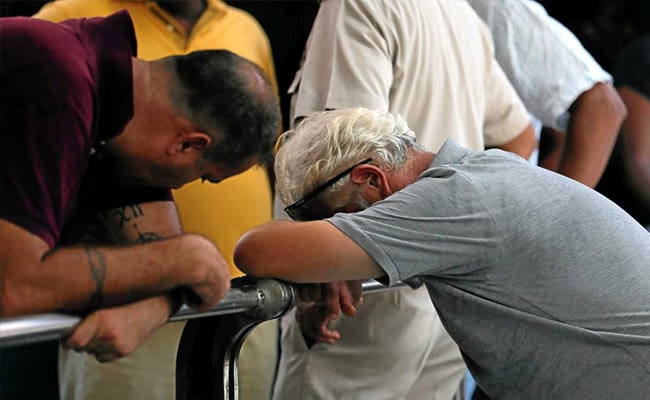 COLOMBO : The death toll on Monday sharply rose to 290, including six Indians, from a series of eight blasts that tore through churches and luxury hotels in Sri Lanka, police said, as they arrested 24 people, reportedly members of a Muslim radical group, in connection with the country’s bloodiest attacks in a decade.

More than 500 people were wounded in the blasts, police spokesman Ruwan Gunasekera said. The death toll overnight stood at 215.

The blasts targeted St Anthony’s Church in Colombo, St Sebastian’s Church in the western coastal town of Negombo and another church in the eastern town of Batticaloa around 8.45 am (local time) as the Easter Sunday mass were in progress.

Three explosions were reported from the five-star hotels – the Shangri-La, the Cinnamon Grand and the Kingsbury. Foreigners and locals who were injured in hotel blasts were admitted to the Colombo General Hospital.

The number of deaths have gone up to 290 with over 500 injured, Gunasekera said, adding that six Indians have been reported among the foreigners who had died.

On Sunday, External Affairs Minister Sushma Swaraj, in a series of tweets, identified the three Indians as Lakshmi, Narayan Chandrashekhar and Ramesh who died in the blasts.

“Indian High Commission in Colombo has conveyed that National Hospital has informed them about the death of three Indian nationals,” she said in a tweet.

Four of them died in the Colombo National Hospital while the bodies of two of them who succumbed to their injuries from the blast at the Shangri-La Hotel has been sent for further investigation, the National Hospital spokesperson said.

There was no immediate claim of responsibility, but police on Monday arrested 24 people and declined to give further details.

The government has said it will not disclose the details of the suspects involved in the attacks to prevent them from getting publicity.

“Don’t give extremists a voice. Don’t help to make them martyrs,” State Minister of defense Ruwan Wijewardene told reporters when asked for details of those in custody.

Police said the van which had carried explosives to carry out bomb attacks at the three hotels was arrested with its Muslim driver.

A safe house where the bombers had lived for nearly three months leading to the attacks were discovered in the south of Colombo suburb of Panadura.

Sri Lanka Air Force said it found an improvised explosives device along a road leading to the departure terminal at the Colombo international airport Sunday night.

“It was a crude six-foot pipe bomb that was found by the roadside,” an air force spokesman said.

“We have removed it and safely defused it at an air force location,” he added.

Media reports said that there was prior intelligence warning that the NTJ (National Thowheeth Jama’ath) was planning to carry out suicide attacks targeting prominent churches in Colombo. The NJT is a radical Muslim group in Sri Lanka.

Prime Minister Ranil Wickremesinghe has also said that an investigation must be launched as to why intelligence reports of the attack was not taken seriously, Colombo Gazette reported.

Sri Lanka on Monday also lifted the curfew which was indefinitely imposed with immediate effect after the eight blasts.

The blasts – the deadliest attacks in the country’s history shattered a decade of peace in the island nation since the end of the brutal civil war with the LTTE.

The civil war ended with the defeat of the Tamil Tigers, who had fought for 26 years for an independent homeland for the minority ethnic Tamils. The war is thought to have killed between 70,000 and 80,000 people.

The nation has seen some sporadic violence since. In March 2018, a state of emergency was declared after members of the majority Buddhist Sinhala community attacked mosques and Muslim-owned properties. (agencies)