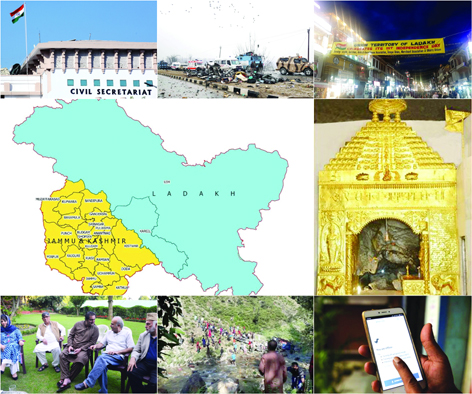 Rajan Gandhi
Year 2019 brought end to uncertainty, Pulwama terror attack and Balakot surgical strikes, end of injustice/ inequality by abrogation of Articles 370 and 35A and subsequently carving of two UTs of J&K and Ladakh. One of the major developments that took place at the fag end of the year is the inclusion of Accession Day as a holiday in J&K UT calendar, and at the same time cancellation of martyr’s day as a holiday.  To sum it up, one after another incidents has made this year as the year of ‘Final Integration’ of J&K with rest of India.
With Governor’s rule in place in J&K much needed development was expected in the state but neighboring Pakistan had its own hostile intentions as a result Pulwama terror attack was plotted, 49 CRPF soldiers got martyred leaving entire country shell shocked, boiling in anger over the dastardly act and India took vengeance by striking at Balakot terrorist camp deep inside Pakistan territory killing almost 350 terrorists followed by failed Pakistan attempt to attack Indian military installations in which one Pakistani F16 fighter aircraft was shot down by Indian MIG fighter by Captain Abhinandan who was captured by Pakistan but subsequently released. In the moment of heat our own MI 16 helicopter was shot down by our own missile. The confrontation continued throughout the year along the entire LOC and IB with India giving befitting reply from time to time. With bunkers in border areas still elusive, hardships of border residents continued with loss of life and livelihood throughout the year.

State administration’s crusade continued against corruption with sacking of Parvez Ahmad, Chairman of J and K Bank and subsequent raids by ACB at bank’s headquarters and at many places to unearth loans and NPA nexus of various branches of the bank. Fight against corruption was not confined to bank only as various state Government officials were also raided time to time including Ex MD of SICOP, Ex JMC Commissioner, Ex Director ISM and first time properties of a TSO were confiscated by ACB. J&K Bank implemented RTI and CVC guidelines.CBI also raided various places in gun license scam and bank fraud cases in J&K.
NIA and ED continued their own raids on separatists and hawala operators to tighten the noose around separatists with the result many of them along with their sympathizers landed behind the bars and the list includes Yaseen Malik, Shabir Shah, Masarat Alam, Asiya Andrabi, Zahoor Watali and many more.

For the first time house of a separatist namely Asiya Andrabi was attached and properties of others including Shabbir Shah and Watali were also attached for hawala transactions and terror funding. Government also banned JKLF and Jamaat-e-Islaami to curb radicalization and secessionism. Azhar Massod got designated as Global Terrorist and centre tightened noose with the amendment in Unlawful Activities Prevention Act thereby declaring individuals like Lakhvi and Hafeez Saeed as individual terrorists rather than their organizations. Pakistan remained on the Grey List of FATF and may be blacklisted in coming year.

Terrorism continued to claim innocent victims this year also with J&K Police losing DySP Aman Thakur, DIG Amit Kumar got severely injured along with other numerous martyrdoms. Civilians also bore the brunt equally as more recently shopkeepers, casual outside laborers and truck drivers as prime victims after August 5 UT declaration. Kishtwar also faced terrorist incidents with gunning down of Chanderkant Sharma of RSS and all four cases of terrorism handed over to NIA. Rasana case accused got convicted and CJM Court directs SSP Jammu to register FIR against then SSP Crime, Ramesh Jalla and SIT team as witnesses were coerced/tortured/forced by applicants (SIT) to give false evidence against accused Vishal Jangotra.

Accidents throughout the state occurred unabated this year also especially in Chenab Valley Area with hundreds losing their lives and most astonishing is the fact that more people lose their lives in accidents in J&K than terror related incidents. NH44 remained a nemesis throughout the year as four laning of the highway continues with no sight of early completion causing numerous hardships to public which further got compounded with the restrictions imposed twice a week for army convoy movement after Pulwama attack. Banihal Qazigund tunnel also missed its 5th deadline.
PM Modi got elected for second term and immediately swung into action with bills on Triple Talaaq, Unlawful Activities Prevention Act and most important of all abrogation of articles 370 and 35 A. Showing exemplary will to deliver on ground, all necessary precautions were taken into account and in the process Shri Amarnath Yatra got interrupted midway along with cancellation of three major pilgrimages namely Machail Mata Yatra in Kishtwar, Baba Budha Amarnath in Poonch and Kausar Naag in Reasi. Two UTs of J&K and Ladakh were carved out of state with J&K having provision of assembly but Upper House (Legislative Council) got abolished. Many restrictions were imposed to avoid collateral loss that included phone and internet blockade causing hardships to public especially students. Historic decision has fizzled out many myths of Pakistan, dynast politicians as well as separatists as public of J&K accepted the verdict with mixed feelings at Jammu, loss of Statehood and being still associated with Kashmir remain the heartburn, Ladakh also received it with mixed response with Kargil went for bandh and no major incident even in Kashmir since August speaks about the ground reality. BDC elections were also held successfully as well as personal visit of group of EU Parliamentarians. In the din of this all three CMs are still under detention along with many more to prevent them from inciting public. Pakistan expelled Indian envoy and downgraded diplomatic ties, cross border trade suspended with India withdrawing MFN status to Pakistan, imposed 200% duty on import of anything from Pakistan and Pakistan closing its airspace even for VIP Indian flights.

Keeping his promise of special significance for J&K, PM Modi visited J&K multiple times this year specifically marked is his Dal lake Ride, numerous inaugurations of colleges and other development projects from Jammu only and he preferred to celebrate Diwali with Jawans at Rajouri. Along with UT status, dream of Dr. Shyama Prasad Mukerjee of ‘One Nation-One PM- One Flag’ got fulfilled and Nashri tunnel was renamed as a mark of respect for Dr. Shyama Prasad Mukerjee. On the development front many new projects got sanctioned which included 624 MW Kiru HEP, Ujh Multipurpose Project after seventeen years finally saw the daylight for overall benefit of Kandi area with capability of irrigating almost thirty two thousand hectares of land and 186 MW power, Rs. 150 crore Keerian Gandyaal interstate bridge got dedicated to the state and Patnitop Ropeway also became fully functional.
Many projects saw the hiccups which included Dry Port at Samba, Jammu Barrage, one hundred ninety crore Jammu Assembly Complex misses 5th deadline again and Jammu Ropeway which despite completion since January 2019 is still waiting to be inaugurated. Six newly established medical colleges got Principals and two more medical colleges were announced at Udhampur and Handwara. Despite new medical colleges, Health Department remained a major area of concern with inordinate delay of AIIMS, no emergency at SSH Jammu, scarcity of medicines even at emergency after mysterious drug store fire, eye bank finally got established but still non established are H1N1 lab, and kidney transplantation at SSH Jammu, sanctioned years ago.
Unauthorized mining is another grey area which faced repeated interventions of even High Court as crores are pending in recoveries; mining at unlicensed areas with active convenience of officials with impunity is so much prevalent that miscreants started digging at the base of 4th tower of Jammu Ropeway Project causing imminent danger to the ropeway. Hiding mining data from IBM with no FIR registered in the whole year is another area of great concern. Scarcity of water remained this year also as no new water augmentation scheme got implemented and most of Jammu’s water supplied failed BIS tests conducted by GoI.

Seven State Commissions got winded up which included SCDRC, SHRC, SIC, SCPWCR and SAC. Separate Prosecution Directorate got sanctioned. Digitization of land record, introduction of English as sub language and shifting of registry powers to revenue department are other initiatives taken to streamline the things. NGT laws also got implemented but both JMC and SMC again disappointed the public with still no operational plans for Solid Waste Management despite interference by HC, unchecked pollution of water bodies with only functional STP plant of Bhagawati Nagar stopped operations and even Smart City Project witnessed least progress. Despite parking chaos, no new parking project was undertaken during past year.
Paharis got 3% reservation for the first time as well as IB residents got reservations at par with LOC residents and 66 more villages were inducted in RBA list, 24 from Jammu. Governor’s administration reverted exemption of stamp duty for women on registry and fixed 3% for women and 7% for men. Despite record highest Rs.1118 crore income tax from J&K with nearly 89000 new assesses, 27000 from Kashmir, raids on defaulters were carried on both at Jammu as well as Kashmir. Decision to wind up JAKFED and unbundle PDD along with Rs 3500 crore State Bonds to clear power arrears were taken. Blackout of Chenab Valley for weeks and more recently of Kashmir with the first snowfall show how hollow the claims of authorities were regarding power reforms. Chopper services to Poonch, Rajouri, Doda turned out to be damp squid. Jammu faced hailstorm thrice this year with extensive damage. High state GST and increased road tax paralyzed automobile industry in J&K. High Baan Toll Plaza tax and another toll plaza at Sarore remained the eye of storm for public.
But abrogation of article 370 has not gone well with many and as such challenged in Supreme Court and right now SC is monitoring situation and curbs imposed accordingly. Mobile internet ban continues in J&K causing tremendous hardships to everyone from students, patients, businessmen and even Government as various schemes remained unutilized. Severely handicapped is media in the absence of mobile internet as daily reporting has become a herculean task.
After abrogation of article 370, which gave citizenship to WPR, PM Modi successfully got CAA giving citizenship rights to lakhs of non Muslim minority refugees stranded in India after persecution threats in neighboring countries of Pakistan, Bangladesh and Afghanistan. Violent protests witnessed against the act.
England won the Cricket World Cup but J&K’s sports infrastructure remained neglected this year also. Four persons from J&K received Sahitaya Academy Award namely Sunil Sharma, Vijay Sharma both from Jammu, Sagar Nazir and Naji Munawar from Kashmir. Harmanpreet Kour brought laurels to Jammu as she became the only student from India to get selected at topmost Stanford University of California for her Ph.D. We witnessed transition from State to UT and from Governor to LG, G. C. Murmu as LG of J&K and R.K.Mathur as LG of Ladakh but fate of three former CMs is still not known as all three of them right now under detention, far away from politics and their parties in disarray. With clear cut policies drafted for development, we hope dawn of peace, hope, equality and progress is not far behind in the coming year.
We wish all our esteemed readers ‘A Very Happy and Prosperous 2020.’