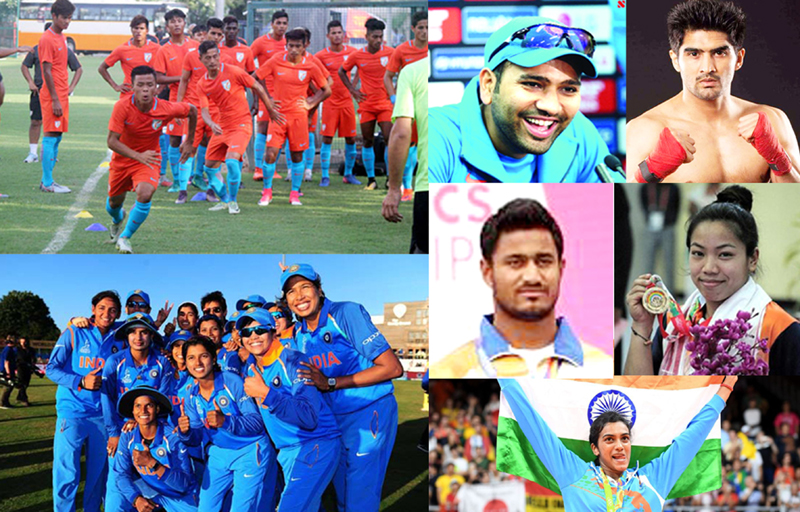 With the year coming to a close, it’s time we look back  some of the fantastic moments in Indian sports that captured the hearts and minds of the people. The following list includes seven memorable moments in  Indian sports in 2018, not in any order of importance.

Chanu wins gold in the Weightlifting World Championships
For the first time in more than two decades, an athlete from India won a gold medal in the Weightlifting World Championships.
Mirabai Chanu, the diminutive 4’11, 106 lb athlete from Manipur won the gold medal in the women’s 48 kg division, lifting an impressive 194kg—a new national record—at the World Championships in Anaheim, USA. Coming from a humble background, and employed by the Indian Railways, this athlete from Manipur had a successful year after suffering disappointment at last year’s Rio Olympics.
Earlier this year, she qualified for the Commonwealth Games next year after securing gold at the Commonwealth Senior (men and women) weightlifting championships in Australia.
India host Under-17 Football World Cup
With the emergence of the Indian Super League, football in this country is experiencing a resurgence in popularity. The game in India received a further boost when it was chosen to host the FIFA Under-17 football World Cup.
It was a momentous occasion for a nation that had never participated at a World Cup in what is arguably the most popular sport in the world. Although as host nation India failed to get out of the group stage, its boys in blue performed with a lot of guts and the experience of playing against the best players in their age group will prove invaluable.
After a hosting a successful global football tournament, chances of India hosting other more significant events like the U-20 FIFA World Cup, for which the country has made a bid for the 2019 edition, seem very possible.
Boxing champion Vijender Singh’s message of peace
In a moment of real sportsmanship and top-notch diplomacy, Indian professional boxer Vijender Singh did something that won the hearts and minds of fans in both India and China at a time when the two Asian giants were locked in a tense stand-off on the border.
Vijender won his gruelling 10-round bout against China’s Zulpikar Maimaitiali, retaining his WBO Asia Pacific super middleweight title, while also securing his opponent’s WBO Oriental super middleweight belt.
However, the boxer from Haryana offered Zulpikar’s title back to him in a message of peace. “I don’t want tension on the border. It’s a message of peace. That’s important,” Vijender said after the fight.
Indian Women cricketers win hearts
India posted 281 for the loss of 4 wickets from 42 overs after spell-binding innings of 171 from Harmanpreet Kaur and then bowled out Australia for 245 to enter the final, where it unfortunately lost. However, the women in blue won our hearts.
Sunder Singh Gujjar bags gold in Para Athletics C’ship
India achieved its highest ever medal tally at a World Para Athletics Championship in the 2017 edition of the event in London with five medals—one gold, two silver and two bronze medals. The proudest moment, however, was when para-athlete Sundar Singh Gurjar won the gold medal in the men’s javelin throw F-46 event, beating the best in the world by a considerable distance with an effort of 60.86m. The throw marked a personal best for the Indian.
PV Sindhu wins silver in World C’ship
In the course of her career, the shuttle queen from Hyderabad has had her fair share of memorable matches. However, there is one that stands out, even if it came in defeat. It was an epic battle of will, guts, stamina, and supreme skill, producing at one point an astounding rally of 73 shots.
In the final against Japanese shuttler Nozomi Okuhara, both players went the distance, producing a stunning 110-minute marathon battle, which finally ended in defeat for PV Sindhu with the score reading 19-21, 22-20 and 20-22.
Some long-time observers of the game called it one of the greatest matches ever played in badminton history. Others, however, purred at what they felt was the best advertisement for the women’s game. In other words, the match, which played out on the global stage, resonated beyond the confines of Indian badminton.
The reader must note that this isn’t a definitive list by any stretch. You might have serious differences with the list, and it is probably safe to even deem this as an alternative list of the six most memorable moments in Indian sports. It’s up to you.
Rohit scores 3rd double century in ODI’s
Talented Indian batsman, Rohit Sharma scored record 3rd double century in ODI’s in the current year against the recently held. At the PCA Stadium in Mohali, India’s stand-in captain hit his third double-century to further enhance his reputation as an ODI opener par excellence.
In November 2013, Rohit had become the second male batsman after Sachin Tendulkar to score an ODI double-century, stunning Australia with 209 off 158 balls with 12 fours and 16 sixes. A year later, against Sri Lanka at Eden Gardens, he pummelled the highest score in ODIs – 264 off 173 balls, with 33 fours and nine sixes.
Martin Guptill (237*), Virender Sehwag (219), Chris Gayle (215) and Tendulkar (200*) are the other batsmen to hit ODI double-centuries; it is no coincidence that each was an opener. This was Rohit’s 16th ODI century, taking him past Sehwag to fourth place in India’s all-time centurion list. Tendulkar (49), Virat Kohli (32) and Sourav Ganguly (22) make up the top three.