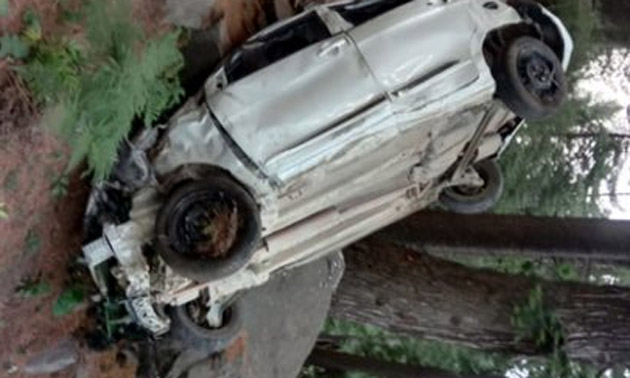 RAMBAN, May 22: Two persons including a toddler were killed and seven others received injuries after a car they were travelling in fell into a deep ditch at Sanasar here today.
As per police sources, a car bearing registration number JK06A-5525 fell into a deep gorge at Sanasar, resulting into on the spot death of a lady and injuries to eight others.
After getting information, police team rushed to the spot and shifted the injured persons to CHC Batote, where a toddler succumbed to her injuries thereby raising the death toll to two.
Five injured persons were referred to Government Medical College and Hospital (GMCH) Jammu for specialised treatment, whereas two injured admitted in CHC Batote are stated to be out of danger.
The deceased were identified as Sara Begum (51), wife of Abdul Khaliq and Aiet (10 Months), daughter of Tousib Ahmed, both residents of Kashtigarh District Doda, while the injured were identified as Sarfraz Ahmed and Tousib Ahmed, sons of Abdul Khaliq, Nasreena Begum, wife of Zafferullah, Abida begum, wife of Khursheed Ahmed, Hinna Kousar, daughter of Abdul Hamid, Maniza, daughter of Zafferullah and Harish Tousib, son of Tousib Ahmed.
The bodies of the deceased were shifted to mortuary of CHC Batote for completion of medical and legal formalities.
A case under relevant Sections has been registered at Police Station Batote and investigation started.