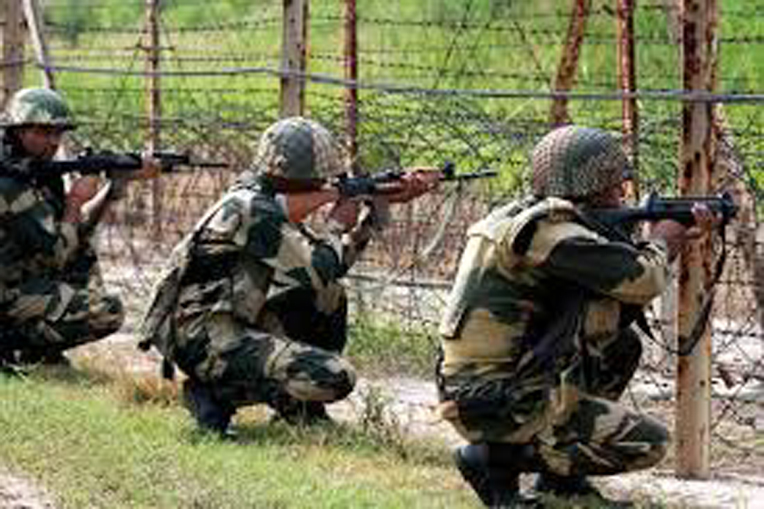 Fayaz Bukhari
SRINAGAR, Mar 5: Two Hizbul Mujahideen militants were killed in a gun battle in Reshipora area of Tral town of South Kashmir’s Pulwama district today.
A joint team of Army’s 42RR, 180 Batallion of CRPF and SOG of police cordoned off Reshipora village after credible input about presence of militants hiding in the area.
As the house to house searches were going on, the search party of the troops was fired upon by the militants. The fire was retaliated, leading to a gunfight.
The operation was put on hold last night and the cordon was strengthened so that the militants may not flee from the village under the cover of darkness.
Click here to watch video
The firing resumed in the morning and residents of the area woke to huge sound of blasts and gun fire. The encounter lasted around an hour during which two militants were killed and the bodies were recovered from the site of encounter.
They were identified as Adfar Fayaz Parray son of Fayaz Ahmad Parray, resident of Gulshanpora Tral and Irfan Ahmad Rather son of Ghulam Hassan Rather, resident of Shariefabad, Tral.
As per police records, they were affiliated with militant outfit Hizbul Mujahideen. “They were involved in conspiring and executing several attacks and were wanted by the law for their complicity in a series of militant related incidents including the attack on security establishments and civilian atrocities. Several cases were registered against them for their activities,” police spokesman said.
“Arms and ammunition including rifles were recovered from the site of encounter. All these materials have been taken in the case records for further investigation and to probe their complicity in other cases,” he said.
Clashes erupted during encounter between local youth and security forces in which a civilian was injured. Identified as Farooq Ahmed Malik he suffered a bullet injury in his hip. He was shifted to hospital for medical treatment and was stated to be stable.
Police have registered a case and initiated the investigation in the matter.
So far 15 militants were killed in a major offensive launched by security forces against militants after the attack on CRPF convoy in Pulwama district last night. The killed include 11 militants of Jaish-e-Mohammad outfit including their operational commander who was mastermind of the attack.
The troops have also arrested over 50 OGWs of JeM and other militant outfits and their sympathizers.
Traders strike
disrupts life
The strike called by various trade bodies over banning of Jamat-e-Islami and tinkering with Article 35A disrupted normal life in Kashmir today.
Shops and other commercial establishments were closed in several parts of Kashmir. Traffic on the roads was thin.
Police and para-military CRPF were heavily deployed in the sensitive areas of Srinagar and other towns to prevent any violence.